Bobby Stewart on Ocean Roar at the 1969 Kentucky Derby.

The 2019 racing season is loaded with special anniversaries. Last week it was Barbara Jo Rubin and this week belongs to another jockey, Robert Roy "Bobby" Stewart.

In 1969 the American Triple Crown races turned into a duel between Calgary resident Frank McMahon's Majestic Prince and Arts and Letters, but our story centers around the Derby that year. 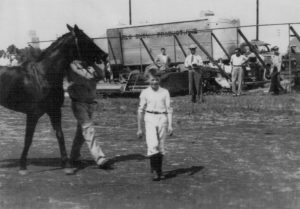 Downs’ riding star Bobby Stewart was fortunate enough to secure the mount on speedball Ocean Roar for the Derby. Go figure, a jock from our own Assiniboia Downs getting a chance to ride in racing's most iconic horserace. As far as I know, this is an honour that has never before, or since, been bestowed on any member of the Downs' jockey colony.

This past May 3rd marked the 50th anniversary of Bobby's appearance in the Run for the Roses. Reality check time, Ocean Roar stood no chance of winning the race. Stewart wasn't going to let a once-in-a-lifetime opportunity pass him by though. Once the starter sent the field on its way, Bobby hustled Ocean Roar to the front and led the pack for six furlongs of the 10-furlong classic. Predictably, the last four furlongs were killers for Bob's speedster, but that didn't matter. Bobby was in the call in the Kentucky Derby and life was good.

A highlight of his career? You betcha!  It was the best of times for the 24-year-old Humboldt, Minnesota native. Bobby was in the prime of a riding career that spanned the years 1960 to 1976 and saw him accomplish so much.

… but all good things must come to an end. Injuries and general wear and tear on Bob's back led to an early retirement in May 1976. He hung up his tack when he was only 31, an age where most riders are still working hard at their craft.

Fast forward 16 years to May 3, 1985. Despite my admiration for Bobby's prowess in the saddle, he was no saint. Somewhere along the way, Bob's life unraveled.

Over the years Bob changed. The father to son Lance, daughter Lori and husband to Sandy, drank too much. In the end, it was the alcohol that consumed him. Lance and Lori were toddlers when their Dad had his run the Kentucky Derby, but were impressionable young adults when Bob's life crashed and burned. Bob lived life hard and it got away from him. He wasn't the man Sandy married or the father that Lance and Lori knew.

While the details of exactly what transpired that fateful day are sketchy, the outcome isn't. Thirty-four years ago, this past May 3, Bob Stewart's life came to a tragic end in a confrontation with law enforcement officers in Minnesota. Bobby was only 40 years old when his earthly pain was finally eased.

Bob’s racetrack accomplishments were dwarfed by the failures in his personal life, which can be traced directly to the disease known as alcoholism. Out of respect for the family, no other details of that day need be shared.

Bobby could have ridden anywhere and excelled, but he chose Assiniboia Downs. Why?

It was close to home; the fishing was good and riding in Winnipeg meant Bob was a big fish in a small pond. He liked that! Stewart spent 16 years at the Downs writing and re-writing the record books.

The custodian of the jocks’ room was always having to deal with Bobby’s tendency to be the last jock to reach his horse in the paddock. Stewart was known to swagger nonchalantly behind his fellow riders, while getting the last puff out of his cigarette. It was said that he gave the appearance of going nowhere and having all day to get there. The first win of Bobby's career came on June 29, 1960 when he rode his father Glen's Royal Ghost. In fact, three of Bob's six wins that year came on Royal Ghost, but what's astonishing about his wins on the family horse is that the betting public ignored the grey beast. Royal Ghost paid $22.50, $33.80 and $37.60 to win in those three races. In what universe would you get those prices today? Think about it. A three-time winner, where the jockey was riding the family horse.

One of his major feats came on June 15, 1971 when he rode six winners on an eight-race card. Bob's record would stand until June 23, 1976 when Jim Sorenson rode seven winners on a nine-race card.

Bob rode 724 winners during his time at the Downs and topped the Jockey Leader Board a record-setting six times. In 1970 Stewart became the Downs all-time leading rider, surpassing Dick Armstrong's 478-win total. Bob was the first rider at the Downs to reach the 500, 600 and 700 win-plateaus. His 724 lifetime wins would be tops until 1981 when Jimmy Anderson took over. If you haven't picked up on it yet, when it comes to Bobby, I've got a bad case of hero worship. In my books Bob was the best and if you don’t believe me, here are some other opinions:

Noted handicapper and sports columnist with the Winnipeg Tribune and Winnipeg Sun, Harold Loster, said that Bobby knew the track at Assiniboia Downs “like the back of his hand."

Downs patriarch, the late Bert Blake said that “no one could switch sticks like Bobby” and that Stewart had “no peer at Assiniboia Downs.”

Hall of Famer and one-time Editor and Publisher of the Daily Racing Form, Sam Perlman said the Bobby was “as good as any of the top jockeys who ever rode in Winnipeg,” and he saw the likes of Johnny Longden and many other greats ride at old Whittier Park and Polo Park.

2019 marks my 10th year as the Downs track historian. The first project I ever worked on for the Downs came in July 2010, when I was asked to put together a display for the Bobby Stewart Memorial race that was run on July 10. It was the start of my working relationship with the Downs and my friendship with the Stewart family.

Today, we remember Bobby's incredible gift and his accomplishments at Assiniboia Downs and celebrate the best of times…

50 years ago, in his historic "Run for the Roses."