You hear glowing accolades about certain thoroughbreds all the time around the race track.  You know, the usual and arguably over-used descriptors like "the peoples' horse", "champion" and the like. I do it here in my blog stories all the time, but the truth is sometimes it can't be helped.  Every once in a while a special horse will emerge from among its peers.

Such is the case with a bay gelding from the 1960s by the name of Already Dia (pronounced Di, as in Princess Di).

So say it any way you want, but the gelded son of Thirteen of Diamonds out of All Ready Joan was what the late Assiniboia Downs patriarch A. E. "Bert" Blake would have called a "nice" horse.  In his prime, the newspaper scribes of the day referred to Dia as the "outstanding handicap horse in the west."  He was a good one and today we remember his distinguished record and lifelong achievements.

Those of you who weren't around in the 1960s or don't remember Already Dia might wonder why he merits such lavish praise.

Lets begin with the fact that he won at distances ranging from 5-furlongs to 1 1/4-miles.  This isn't normal. Usually you'll see speedballs who excel at sprints or route horses who can run all day, but not both. Owner/Breeder Phillip J. Rock of Drumheller was one of Alberta's leading farmers, with a national reputation for his breeding of Shorthorn cattle and Suffolk sheep. Mr. Rock passed in June 1965 at the age of 88, while Dia was still in his prime.

Trainer William G. "Billy" Trevenen was an Alberta horseman who moved to Winnipeg in the 1940s.  He retired from racing in 1977 and passed on Christmas Eve 1985.  Trevenen was known as "a fine father, an honest man and an excellent horseman."

Jockey Dick Armstrong was Dia's regular rider for the bay geldings races at Assiniboia Downs. "Dickie," as he was known, won four leading riding titles at the Downs and in 2008 helped celebrate our 50th Anniversary. Armstrong passed away in November 2009.

Already Dia was a good-looking, magnificent beast, who broke his maiden at two in a 5-furlong sprint at Exhibition Park in Edmonton in June 1961. Early in his career the bay distinguished himself as a crowd favourite in the west. Dia was an extremely popular horse at the Downs, where he ran many of his races. He took to our racing strip very well, especially when the track was fast.

Already Dia was rarely beaten because he ran a bad race. He was a consistent performer who gave his all every time out.  This was a trait that caused his fan base to swell at our west end oval. His Achilles' heel?  An "off track."

In 1962, Dia was touted as an outstanding prospect for the Manitoba Derby, but Mother Nature had her own plans. On July 27 he won the Derby prep-race, the Kirkfield Park Handicap. It was his fourth win in seven starts that year and he also finished second three times. The Derby was run on Monday, August 6, but on the Sunday before the Derby the Downs experienced some serious rain. On Derby Day the track was drying, but rated "heavy." For horses with off-track issues, it gets no worse than heavy. Sent off as the favourite, Already Dia finished a badly beaten fourth to Welcome Effort, a horse he had beaten before and would beat again.

On July 25, 1964 the Trevenen-trained bay broke the track record for the mile at Assiniboia Downs. In his record setting race, Dia was ridden by regular rider Dick Armstrong. The previous mile mark had been set on June 14, 1958, the first week the track had opened, by Big Berne, ridden by none other than Dick Armstrong.

Dia's record stood for eight years, although there were some very gifted horses who ran faster times for the mile "point of call" while going 8 1/2 or 9-furlongs.  Nevertheless, Dia's record stood as the fastest mile run at the Downs until July 7, 1972.

The new mile mark was set by Gladiatore ll and his time of 1:35 4/5 was so impressive that it still stands today. Glad's romp for glory forever erased Dia's name from the history books and also brought to an end jockey Dick Armstrong's 14 year association with the mile record at the Downs.

Already Dia was such a dominant force in his races that he was often forced to lug 10 plus pounds more than his competitors. Dia's 1965 Gold Cup win was one of his finest hours.  After finishing second in the Cup for two straight years, he was sitting on a win. However, for the Gold Cup, he was assessed a record impost of 128 pounds. This was more weight than any other horse had ever been asked to carry in the Gold Cup since the race was inaugurated in 1958.  He was spotting his competitors anywhere from 13 to 23 pounds in the 9-furlong contest.

Dia took charge at the quarter-pole and was never headed. He had no difficulty shaking off Solar Ray, who pushed him with his 23 pound advantage. Solar Ray wound up dead last and was clearly no match for the winner, regardless of the weight they piled on Already Dia.  The closer in the race, Mr. Brass,  despite his 13 pound edge in the weights, was unable to take advantage of the "rabbit-like" efforts of Solar Ray and finished three lengths back of the winner.

The 1966 racing season was barely underway when Already Dia suffered an injury while racing in Alberta. Dia's connections were satisfied that he was on the mend and shipped him to Assiniboia to compete at the Downs summer meet. The big bay was scheduled to run in the sixth race on July 30, 1966. On that day Assiniboia was packed to capacity, it was Derby Day and everyone's focus was on race seven, the 18th running of the Manitoba Derby.

Nothing in his pre-race behavior hinted at what was to happen when starter, Nick Cizik sent the field of nine on its way. The official form chart said that Already Dia was "eased,"  but this wasn't an accurate description of the race.  It was more a case that Dia refused to run and nothing his jockey Ray Correa tried was going to coax him to run.

Every horse is entitled to a bad race and Already Dia had his, but I prefer to think that the proud bay gelding called his own shot that day. He was not going to compete. Dia was done!

Following the race, Correa was quoted by the local press as saying "I'll remember that race for a long time." What made it even worse was the reception the once proud gelding and accomplished premiere handicap horse in the west received when he finally made his way to the front of the grandstand. The capacity crowd applauded, but it wasn't a job well-done kind of applause, it was a far less sincere response and some even laughed.

It was a sad ending to an otherwise outstanding career and Dia would never race again.

If only his final appearance, you couldn't call it a race, was different. Perhaps a "do-over" or a "mulligan" was in order. Other than the mention of his injury in his previous race, no explanation was asked for or given for his behavior on that fateful day.

History will record that Derby Day at the Downs was not kind to the talented beast. His own Derby Day run over a heavy track in 1962 was a disappointment and his career ending run on Derby Day in 1966 was awful. A kinder finish to his otherwise stellar career would have been desirable, but sometimes fairy tale endings aren't always in the cards. 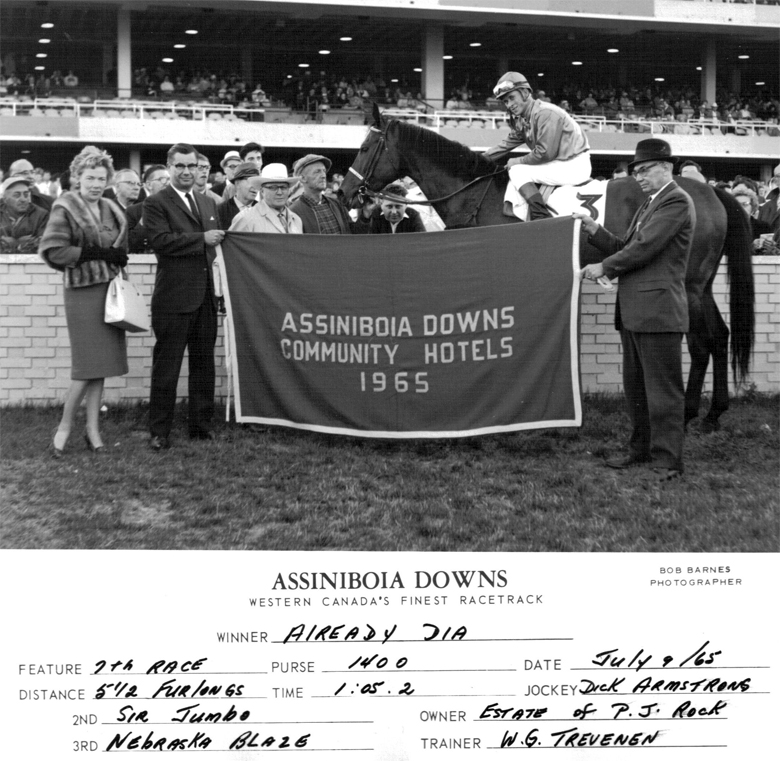 In 1967 as a postscript to his regular racing article, Elman Guttormson reported that Already Dia had been retired to the farm "for a life of leisure."

Just the other day, Doc Norm Elder told me that Dia had an unorthodox running style - when he ran his legs would flail all over the place. In a way his competitors should be thankful that he was not a more fluent runner.  It's hard to imagine that he could have been better...