ASD Opening Day 2015! How about a little history! 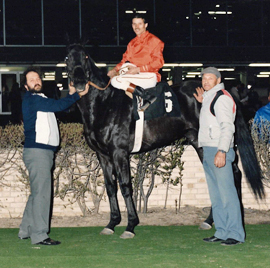 Balancing Dancer wins on opening day May 3, 1985. Jacques Desautels up.

Season #58 is upon us and our majestic four-legged friends go to post this Sunday, May 10th at 1:30.

It's Mother's Day of course, and as has become a tradition, the Downs kicks off the 2015 race meet on the day we honour the woman who is at the core of the family unit.

There's another rite of spring, but it's more of an ornery old pest, let's call it - Downs' Drama!

This too has become a tradition and quite frankly one that we could do without. It wouldn't be spring if there wasn't the usual amount of political drama. These days it seems that we can't get the race meet underway without a government-fueled challenge being thrown at the Manitoba Jockey Club.

Wouldn't it be nice if just one year we could look forward to the new race season without having to address the annoying obstacles that are thrust on the Downs like a plague of locusts?

After all, at the end of the day, isn't it all about the horses? They are the stars of our show and let's hope we never lose sight of that! So, with this in mind, let's take a look back at opening days when things were simpler, or at least it seemed that way.

Addie's Pride owned by Peter Moss and trained by Ian McDonald won the first race of the season, the Don Gray Memorial with jockey Tom Adkins up. May's Relic upsets in Inaugural Handicap on May 8, 1970. Ed Werre in the saddle.

9-year-old blazed-face May's Relic surprises them all when he wins the Inaugural Handicap for JY Farm and pays $36 to win.

Multiple graded stakes-placed trainer Glenn Magnusson records a natural hat trick, winning the last three races of the day on his way to a season total of 33 wins, which was enough to capture the Downs' leading trainer title in 1960.
______

As we count down to opening day this Sunday there's just a couple of final thoughts.

Remember, the first race of the meet is always the Don Gray Memorial Purse. The late great trainer passed on Christmas Day in 1993 and will forever be missed!

The Downs is featuring a new and exciting promotion this year. The first 1,000 fans attending opening day will receive a Manitoba Derby All-Star Collector Series card. Manitoba Derby winner Balooga Bull is the first showcased honouree in the five-card set. Additional cards will be given away on the Downs' Birthday, June 10; Canada Day, July 1; Derby Day, August 3; and the final day of the meeting, September 7. Each day will feature its own Manitoba Derby all-star horse. Be sure to collect all five!

Historian could use your help!

Do you have any old Downs' programs or win photos from the 1950s, 60s or 70s? You can donate them or if you prefer I will scan and return them to you unharmed. You can contact me by way of the Downs General Office at (204) 885-3330 with your particulars and I'll be in touch.