This week's title may be a little cryptic, but there are many of you who will know that our flashback in time is about the man who was Assiniboia Downs track superintendant from 1978 to 1999, Keith Trenholm.

"Super" is such an appropriate title, because Keith had so much on his plate that he had to be almost super-human to handle his duties. Did he have super powers, wear a cape and leap tall buildings in his spare time? No, but only because he never had spare time!

Keith Harter Trenholm was born in Saskatoon on March 31, 1934. He met the love of his life, Audrey, in Salmon Arm, British Columbia, and married her on April 9, 1955. Keith tried his hand at a multitude of crafts, but at the end of the day, Keith Trenholm was a horseman. His varied background made him a "Jack of all Trades" kind of guy. There wasn't anything that Keith didn’t know how to do and if a strange task presented itself, he'd figure it out and get it done!

Keith loved music and played the mandolin of all things. To no one's surprise, at least to those who knew him best, he lived a full life and was one of those people who did everything he ever wanted to do and then some.

As for his work as track superintendent at Assiniboia Downs, legend has it that he received the following critique on a track he had groomed:

"All in one day, I had seven horsemen tell me the track was too slow, too fast, too cuppy, too loose, too hard, too wet and too dry."

While he may be guilty of some exaggeration, there's probably more fact than fiction in that quote. Isn't that so horsemen? Keith Trenholm in the winner's circle with Warhanni. July 13, 1974.

Horseman Doug Smith was a good friend of Trenholm's and said that his friend first came to the Downs in 1968. He ran a few horses, did some training and shod a few. Doug remembers that he and Keith lived in the old tack rooms.  Those were good times! One year, Keith, Audrey and Doug rented the old white house that was out at Ma Ryan's. Anyone remember Ma Ryan?

Prior to taking on the role of "super," Keith operated a small stable as owner/trainer, a regular one-man show at the Downs. He had also done some racing at Exhibition Park, Sandown Park, Portland Meadows, Regina and Marquis Downs.

Early in his racing career there were some lean years. The off-season would see him work in logging camps to help make ends meet for Audrey and his four boys, Dale, Danny, Ronny and Lee.

Keith's "big break" came in early spring of 1978 when Director of Operations, Bob Wright, hired Keith as track superintendent. Trenholm had spent the previous year in Saskatchewan learning the trade and his hiring was considered quite a coup, with management and horsemen equally pleased.

In his first year as superintendent, the Downs purchased a new piece of equipment for the track and spent $20,000 on crushed rock to spread around three new barns. Also on the agenda that year was the construction of the new half-mile training track.

Like Harry Jeffrey before him, Keith’s TV was almost always tuned to the weather channel. During his 22-year career as backside boss, 12-hour-days (and more) were common; there were always machines to fix, a track to be harrowed, the grounds crew to supervise, barns to be repaired, and then there were days when he moved from crisis to crisis.

And there were always the horsemen. They can be a tough crowd and here the old adage certain applies. You're never going to please all of the people all of the time.

October 31, 1980 - Fire fighters were called to a field near the Downs to hose down a pile of horse manure that had caught fire. Fire officials blamed the blaze on spontaneous combustion. Keith Trenholm figured it was pranksters. "I don't believe it would be spontaneous combustion on Halloween Night."

June 24, 1981 - Keith had all six-furlong races shortened by 50 feet. The track condition had deteriorated with heavy rains, making it impossible to properly position the starting gate.

June 3, 1986 - A thoroughbred, Seven Junctions, escaped from his confines at the Downs and made his way to Nick's Inn in Headingley. Trenholm was caught by surprise by this one and acknowledged that it wasn't uncommon for a horse to get loose, but they were usually captured before leaving the grounds. Construction work and an open gate were blamed for the A.W.O.L. runner.

May 5, 1990 - Many will remember Keith's touching eulogy at old Bob Franklin's funeral service.

October 1993 - Trenholm oversaw the dismantling of the deteriorating Speers "Palace Cars."  These old railway boxcars had been parked at the north end of the Downs for 23 years and had been used as additional stall space.

Keith parked his last harrow at the end of the 1999 season. Our current track superintendent, Bob Timlick took the keys from Keith and did his level best to fill Keith's boots, and they were mighty big ones at that. Bob paid his old boss the ultimate compliment, "Keith was the best boss I ever had!" He credits Keith with teaching him the ropes and showing him the tricks of the trade. Timlick learned from one of the best!

Times have changed for the Downs' track superintendent. In Keith's time the "super" was responsible for the maintenance on the track and equipment, as well as for the repairs to the barn area. One of the other assigned duties was to visit other tracks in the off-season in an attempt to convince horsemen that Assiniboia Downs is where they should be racing. During his tenure Trenholm also had the task of changing over the track for the annual harness meet. Come to think of it, back in those days, there really wasn't much of an off-season.

Now-a-days the job entails looking after the track and the equipment needed to get that job done. Is the weather channel still the super's best friend?  Yes, but so are the three additional weather apps on Bob Timlick's phone. You can't be too prepared these days!

Harry Jeffrey was the track superintendent for 14 years, Keith for 22 and Bob Timlick has now been at it for 19 seasons, talk about depth at a key position.  Corporate memory is alive and well at the Downs. Let's leave the final word on Keith to those who knew him:

Hazel Bochinski - Keith was always very obliging, offering help whenever and wherever he could. He was missed when he retired.

Sandy Dimma - Keith was the dearest of friends. Always a laugh and smile. He loved to have fun and he was a lot of fun to be around. His wife, Audrey is a supreme human being. I wish I could sit around and listen to his stories and tip a glass or two with him one more time.

Karen Hendricks - The Trenholm's are the most beautiful family. They were my "other" family and I was their honorary daughter. Anyone and everyone was welcome in their home. It didn’t matter what they did or did not have, they would share or give it to you. Keith was a great man who loved his family and music.  They all played instruments and sang. He was one of those “do anything and everything” guys. If he didn’t know how to do something he would figure it out.  He was Audrey's cowboy.

Ken Hendricks - We were good friends for about 50 years. I rode my first race on a recognized track for Keith. He was good at whatever he took on. He could manage a barn area crew as good as anyone and run/repair any piece of equipment he got on. Keith learned whatever he had to in order to get the job done. 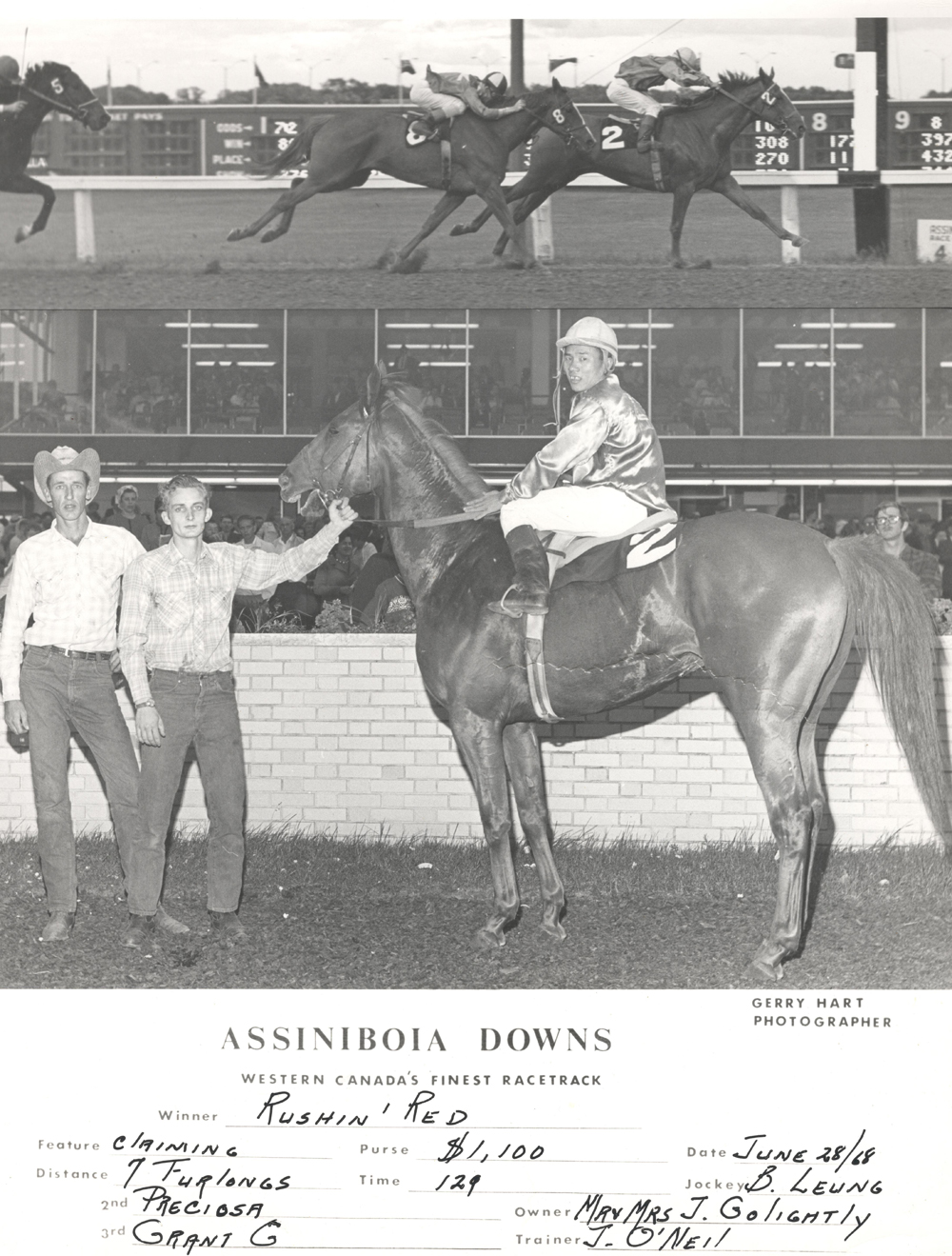 Keith and Audrey were married for 60 years, which is longer than some of us have been on this planet! Keith went through life holding nothing back - he left it all out there on the field.  When the good Lord called for Keith, his bucket list was an array of check marks.

Thank you Mr Trenholm. You did Audrey and your boys proud…