The August 1, 2016 Manitoba Derby will be one I never forget, and forever remember, as bittersweet.

The inclement weather created a dream track if you were a mudder, but it was a less than ideal day for the Manitoba Jockey Club, which was hoping to draw a record crowd. In the end, hardy race patrons came out in droves to enjoy the day and a good time was had by all.

But just as darkness engulfed the prairie track, not far away, Fargo lawyer, dear friend of Assiniboia Downs and the eldest son of the late Glen and Melvy Stewart, Garylle Bruce Stewart watched his final sunset and passed peacefully.

In a way, it was fitting that Garylle would leave us on the biggest day of racing in the 59-year history of Assiniboia Downs. Derby Day will forever serve to mark his death, but in a good way. Future Derbies will be a day to remember a friend, celebrate his life and be forever grateful for having known him.

I've been writing this blog since 2012 and this week is a milestone of sorts. This is my 100th blog story, and I can think of nothing more appropriate than to use it to say good-bye to a friend.

My heart goes out to those he left behind. Some, I have had the privilege of knowing on a personal basis. His daughter Audrey, her husband Brian and their daughter Alissa, and Garylle's younger brother Wayne. I can only imagine the depth of their collective sorrow. There is also Garylle's long-time friend and partner in the racing business, trainer Murray Duncan, and his wife Pat. Murray is a quiet, soft-spoken man who tends to keep his feelings private, but he's hurting.

Murray's friendship with the Stewarts dates back to the fall of 1962, when he met Garylle and brother Bobby in Kentucky. That chance meeting turned into a 55-year relationship that has now come full circle. Bob passed away in 1985 and now, Garylle's gone.

Words are grossly inadequate when it comes to describing the pain of losing a loved one, and when attempting to offer comfort and solace.

In 2014 the Duncan-Stewart Racing Stable was the leading money-winning owner at the Downs. In sharp contrast, it's now the end of August and the stable hasn't won a race. It's been a tough year for the barn and as Garylle's health deteriorated, things went from bad to worse.

He may not have trained or ridden the horses, but Garylle's influence was enormous. He was a man of a thousand stories and a vocabulary littered with catchy phrases like:

Horses are like law suits, you never know where they're going.

To emphasize something that happened a long time ago, he would say:

That was when milk was three cents a quart and Gainsborough was a yearling.

There were so many more, and we're going to miss every one of them.

Garylle was an unpretentious, genuine person, who got along with everyone, from the CEOs of large corporations to the everyday man struggling to earn a living.

Ever look for Garylle at the track? You wouldn't find him in the clubhouse. Try the paddock or the barn. He'd be the one with the suit on.

Going to meet him to grab a bite to eat? Not likely in the Terrace Dining Room. The track kitchen, or the "cookhouse" as some of the old-timers like to call it, were more his style.

In the winter of 2010 Garylle and Murray were having one of their usual "catch-me-up" telephone conversations, but this one was different. They talked seriously about getting back into the racing game together.

Murray left horse racing in 1979 to raise a family and earn a regular salary. Garylle's world was shaken to the core with the untimely and tragic death of Bob in 1985. He not only loved his brother, he idolized him and found that he had to walk away from a sport that now only caused him pain.

So, on a cold winter's night in March 2010, Murray and Garylle decided it was time to return to racing. Perhaps they'd buy a couple of horses or maybe three, and tinker around with something they both loved and missed. 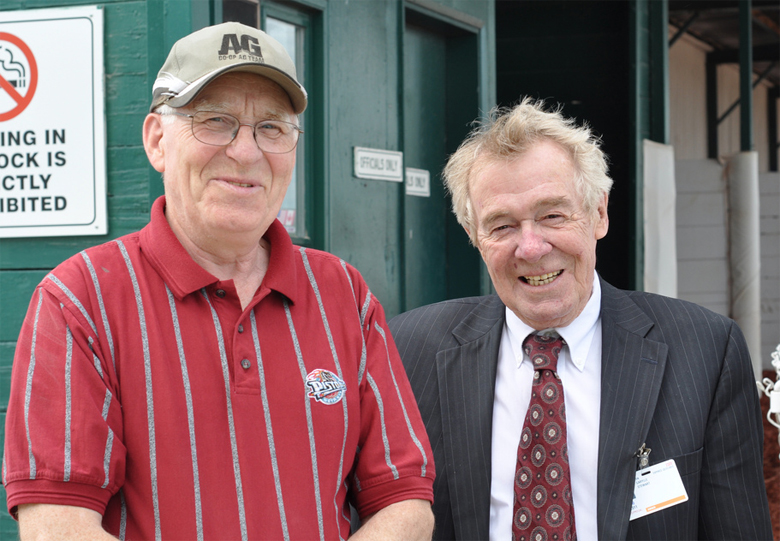 As it turned out, they bought six horses. Garylle recalled that Murray had some tack, but they were no where near ready to outfit and care for a half-dozen horses.

There have been some trying times for racing in general and Assiniboia Downs in particular over the past six years, but Murray and Garylle spent more than $500,000 on horses during this period. The partners would see more than 25 runners go through their barn, almost all obtained via the claiming route at Oaklawn Park during the winter, to race at Assiniboia Downs during the summer. It was perfect timing for the Downs, which needed people to invest in the future of local horse racing.

In their first year back in business, Garylle took it upon himself to honour brother Bob, a six-time leading jockey at Assiniboia Downs, with a memorial race. The year 2010 marked the 50th anniversary of Bob's first career win as a jockey at the Downs.

Bob's death came at a time when the Stewart family was struggling financially. It was a crazy-busy time for Garylle, a North Dakota lawyer who worked long and hard to save the family farm.

Garylle told me that he had received all of the background material relating to Bob's death, but quietly acknowledged that he could never bring himself to read it. In a solemn and heartfelt moment, he admitted that he was probably just ducking the responsibility.

On a personal note, I will forever remember a race that I watched with Garylle in 2015. It was the Canada Day Stakes, and his stakes-winning mare Go Go Lolo was getting to stretch out a bit.

The day was a hot one and Garylle's breathing wasn't good. Daughter Audrey parked the car alongside the service road that runs just across from the track where they start the one-mile races. I walked over to visit Garylle and together we watched Go Go's race from what had to be the worst angle ever. We talked racing and watched Go Go finish a fast closing third. Truth be told, we couldn't be sure where she finished. We just knew she didn't win.

The outcome of the race wasn’t what we had hoped for, but it was a special 20 minutes or so with a man whose company I had come to enjoy. It will go down as one of my favourite race experiences ever.

So what does the future hold? Murray doesn't sound like he's ready for retirement just yet, and Audrey and Brian have grown to embrace thoroughbred racing at the Downs.

The stable is going to take some time off and regroup, but I wouldn’t be surprised if next spring, Murray, Audrey and Brian put their heads together and do a little horse-shopping at Oaklawn Park. I have no doubt that Garylle's love for racing will be well-represented in his old partner, daughter and son-in-law. Don't be surprised if they come back stronger than ever.

Perhaps with a little help from above.

I'm not the most religious person going, but I am a strong believer that there is more to life than what we experience during our time on earth. Somewhere in the cosmos, there exists a dimension where all souls go when our time here is done. Call it what you will -- the next world, the great beyond, heaven, the hereafter -- but I keep peace with myself with the idea that such a place exists. For Garylle Bruce Stewart, I see a barn loaded with thoroughbreds from the past.  Some old friends, Mr. Noction, Grey Emperor and Poetic; and some more recent arrivals, like Pleasant Closing and Follow Your Daddy. Stewart's favourite four-legged friends, now healed and full of vim and vigor.

Garylle's father Glen and brother Bob have been waiting patiently. There's plenty of work and they can use the help. The reunion is peaceful and satisfying for all, but there's much catching up to do and work in the barn will have to be put on hold for a bit.

After all, Garylle and Bob have been apart for more than 30 years. Not to mention that Bert Blake is going to be dropping by for a cup of freshly brewed coffee, or perhaps something a tad stronger. There's a lot to talk about!

Fear not, Garylle will never be far away. He'll be keeping an eye on things, pretty much the way he has always done, only now from a different vantage point. 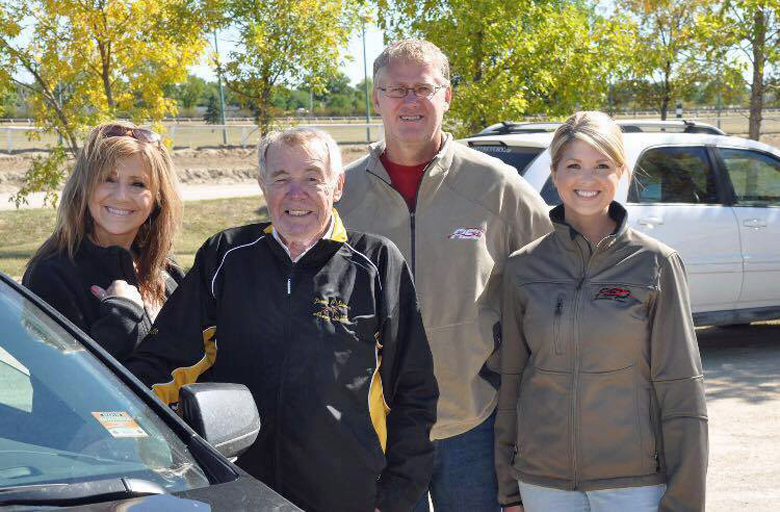 The family. L to R: Audrey, Garylle, Brian and Alissa.

Wayne and Susan lost a sibling, Audrey, Brian and daughter Alissa, a father, father-in-law and grandfather, and Murray Duncan a life-long friend and partner.

And Assiniboia Downs lost a true friend, the kind that you don't easily replace.

Until the big horse wins...