The Manitoba Derby is coming up Monday, August 4, so how about a trip down memory lane for our annual Derby tale.

Local cattleman, Helmuth "Harry" Gumprich will never be famous for his efforts in our Derby, but I have a soft spot for Manitoba horsemen who enter their local-breds in the Derby and dare to dream! In addition, Harry had a great career in horse racing at Assiniboia Downs, and that deserves recognition.

Harry ran three horses in the Manitoba Derby, Icy Beau in 1976, and the entry of Symington Flash and Jenny's Song in 1980. Unfortunately, none of his entrants finished better than seventh. But let's take a closer look at the man who was an integral part of the backstretch at Assiniboia Downs for more than 25 years.

Who knew? Harry used to race stock cars at old Whittier Park in the 1950s!

Harry got into the horse business in the mid-1960s. The first horse he owned was Kitty Zenith, a mare he was offered as payment for a feed bill that he feared he would never collect. So he took the mare, but she couldn't run a lick and never won a race. She did however, produce Count Kit, the first horse Harry raised. Count Kit turned out to be a good consistent campaigner who ran and won until she was 12. As an owner, Harry scored his first win on June 19, 1965, when 3-year-old maiden Navins Belle found the Winner's Circle. Navins Belle was special. Harry said the mare never ran worse than fifth at the Downs, and that she is buried on his farm in Springfield.

As a stakes-winning trainer, Harry was usually in the top 10, and he saddled his first winner Cool Belle with Joseph Selyem up on May 10, 1971. Before he started training in 1971, he relied on the expertise of John Cizik.

Harry turned 85 this July and recalled the good people that he got to know at the Downs over the years, the Halcrows, Dowlers, Danelsons, Blakes, Bob Watt, George Howell, Arthur Liffmann, Bob Anderson, Dr. Norm Anderson, Kenny Murray and old Bob Ramsay of the Bar Ace Stable, to name a few.

Harry's best horse was Cagey Max, who he claimed from "Red" Johnson in 1979 for $5,000. Cagey changed hands a couple of times, but always found his way back to Harry's barn. He loved that horse! Harry said there'll never be another Cagey Max, who registered a win at the Downs when he was 14! I'm not sure any other horse accomplished that!

Harry treated Cagey Max like he was a member of the family and proudly proclaimed that he never had a bandage on his legs, nor did anyone have to pony him. 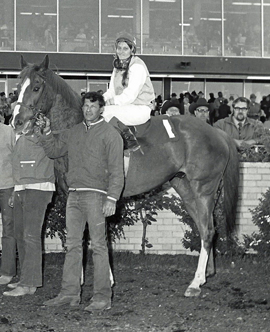 Harry's favourite horse was Dark Hall. Elman Guttormson once said that Dark Hall was one of the best claims ever at the Downs. According to Harry, Dark Hall never lost a race at the Downs when he ran for a claiming price of less than $2,500.

Racing has a nasty habit of taking you to emotional heights only to drop you like a ton of bricks. Such was the case on the weekend of September 9 and 10, 1978.

On Saturday night, September 9, Harry saw his Baron Hudec set a new track record for 1 1/2-miles. The following day, he lost a promising 2-year-old filly, when On the Card broke down.

Harry has also known his fair share of human heartache over the years.

As a child his family survived Kristallnacht or the "Night of Broken Glass." This was a series of planned assaults on Jewish people throughout Nazi Germany and Austria on November 9 and 10, 1938. Kristallnacht refers to the broken glass that littered the streets following attacks on Jewish-owned stores, buildings and synagogues. Nearly 100 Jews were killed and more than 30,000 were imprisoned in concentration camps that fateful night.

After the first day of total chaos, Harry's parents Herman and Martha roused their five children in the middle of the night and escaped to Holland. But it would be a three-year wait before the family would be sponsored and find their way to Canada in 1941. Can you imagine what Harry and his family went through?

In 1987 Harry buried the love of his life, his wife Gertrude, and this past April he faced a parent's worst nightmare when his daughter Ruth died at 48. Ruth was taken long before her time, and had the distinction of having won the Governor General's Medal of Honour for Advocacy.

Harry retired from the racing business after the 1990 season. It was becoming too costly he said. He just couldn't make money at it any more, even though he was one of the top 10 trainers every year. Not to mention that in addition to raising his own horses, he wintered and trained them himself, and grew his own feed.

He didn't say it, but the loss of Gertrude had to have an impact on his desire to continue with horse racing. Harry's son Gary explained that Mom loved racing even more than Dad! It was a passion they both shared. And yet, life goes on for the hardy, spry 85-year-old cattleman from Springfield. Gary says that his father has been talking about relaxing for the last 10 years, but this time he seems to sound a little more serious. Harry explained that he is no longer capable of doing the things he could do a year ago.

I enjoyed talking to Harry and his son, and owe them a big thank you for sharing their memories! And while his horse racing career may be long behind him, on the Sunday afternoon we met, Mr. Helmuth Gumprich laughed, reminisced and told stories about the good old days…

on the backstretch of Assiniboia Downs.