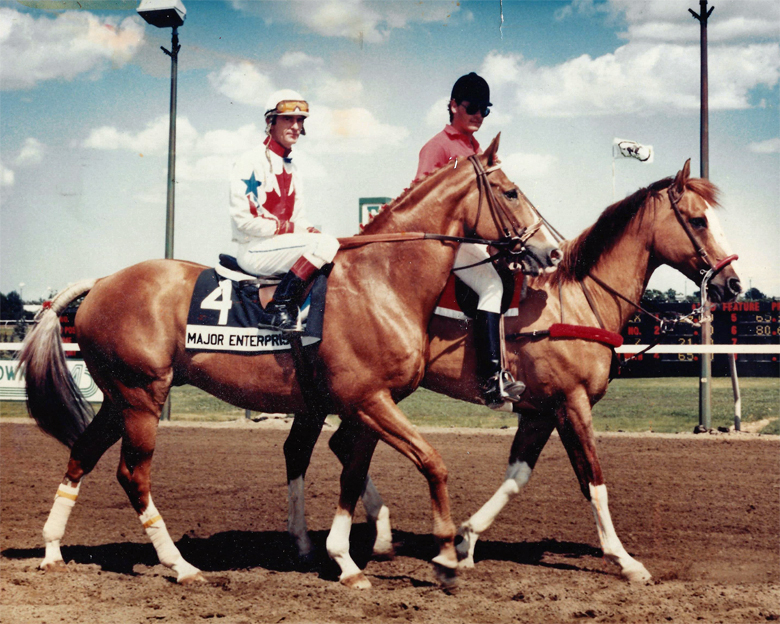 Another Manitoba Derby is in the books and congratulations go out to winner Inside Straight and his connections! What a fine looking beast he is! And that got me to thinking about "lookers" from days gone by.

Talk about walking into a mine field!

With literally thousands of horses to choose from it's crazy to try and single out a handful of horses from the past, but I'm going to give it a shot.

I will preface my choices by admitting that beauty is in the eye of the beholder.  Are there others? You better believe it, but a special "shout out" goes out to these four debonair dudes and two drop-dead gorgeous mares.

Let's check out the guys first. In no particular order there are three chestnuts and a grey/roan which stand out in my mind.

The youngest of the chestnuts (photo above) is Elman Guttormson's Major Enterprise (foaled in 1976). The Major was a multiple stakes winner with more than $200,000 in career earnings. A winner of no fewer than 12 stakes races, his chestnut colouring was complimented with blonde highlights on his mane and tail. He was as dashing as they come and when he retired Elman made sure the Major's forever home was in the deep south, no more Manitoba winters for this boy.

Victor's Pride (foaled in 1972) was another chestnut with blonde streaks in his mane and tail. In full stride he was a beautiful sight. June Sifton's multiple stakes winner had a record of 13-8-2 from 42 starts. His career was highlighted by his four consecutive wins in the Agassiz Stakes. Victor ran against the best the Downs had and when he was right there was none better. The last of our chestnuts is Turn to Rule (foaled in 1971). He was Les Wedge's pride and joy. Wedge acquired Turn to Rule when he was five in a land-for-cash swap and always said that it was the best deal he ever made.

"Ruler" was a gorgeous looking chestnut that had a presence about him that seemed to defy his small size. He was barely 15 hands tall. He may have been small, but you'd never know it. He always acted like he was the biggest and the best on the track and whenever he stepped on to the racing surface he grew taller than ever.

The multiple stakes-winning colt stood out from others because his career spanned nine remarkable years. Seldom do you have a horse of Turn to Ruler's caliber that runs competitively for that many years. In 1981, at the age of 10, he ran in claiming races that ranged from $10,000 to $14,000, and won five of his ten starts, finishing in the top three at an 80% clip. The last of the men is Larry Carter and Sue Hebenton's grey/roan Elite Mercedes (foaled in 1997). This multiple graded stakes placed gelding won all three of his starts at the Downs in 2006 and became the first horse in Downs' history to win the Wheat City, Speers and the Gold Cup in the same year.

Elite's "Triple" was part of a six-race win streak that he put together from May to September 2006. Many others had come close, but the 9-year-old grey/roan gelding made history that year when he won those three prestigious races and pocketed more than $100,000 in purse money       in the process, colour Larry and Sue proud!

The winter of 2006/07 was a tough one for 9-year-old Elite and he just wasn't his old self in 2007, so he was retired. Elite is approaching 20 years of age and has his health issues, but he still has that certain "GQ" look about him as he lives out his retirement on a farm at Okotoks, Alberta just south of Calgary. Now for the female side of the ledger and believe me it was awfully tough to restrict myself to just a couple of choices.

Glen Ball's chestnut mare, Taboga (foaled in 1972) was a true heart breaker.  The winner of the Wheat City Handicap, Manitoba Maturity and Inaugural Handicap, Taboga raced when there really wasn't a good place to run a quality mare, so she took on the boys on a regular basis and more than held her own.

She was a multiple-stakes winning mare for her owner, Wescana Stables, who truly believed she was royalty, a regular princess. She was a smooth large-striding champion and one of the better females ever to have raced at the Downs. 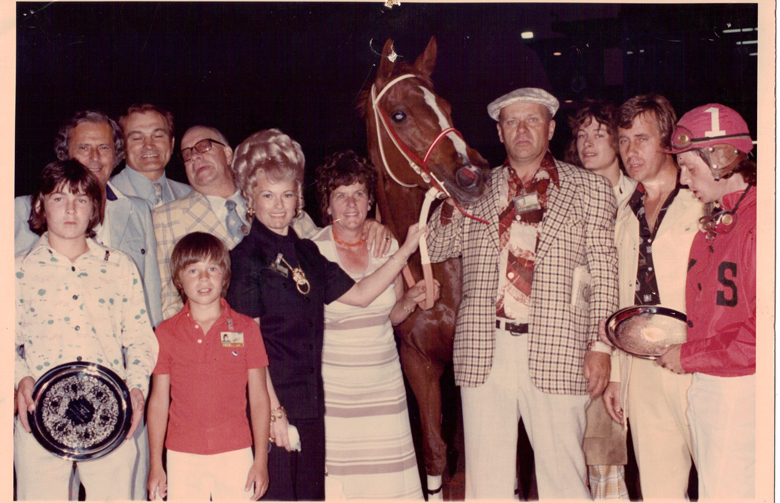 Last up is Pen Pal (foaled in 1957), who was a favourite of Downs' all-time leading trainer Gary Danelson. Pen Pal was a nice roan mare, but no stakes horse. Gary said she was so quiet and gentle that he used to put his son David, who tragically past away in 1976, on her and let the mare walk around the yard. Looking back he acknowledged that this probably wasn't the brightest of ideas, but he knew David was safe on Pen Pal. This mare was absolutely stunning!  And who doesn't have a special place in their heart for a grey? Horses are simply the most gorgeous of God's creatures.

"A horse is a thing of such beauty… none will tire of looking at him as long as he displays himself in his splendor." - Xenophon

They say that a picture is worth a thousand words, and I hope that's the case, because I just couldn't find the prose to describe the grace and elegance of these gorgeous equines from another time.

They were simply…  beauty beyond words.