Everything you wanted to know about the Manitoba Derby, but were afraid to ask 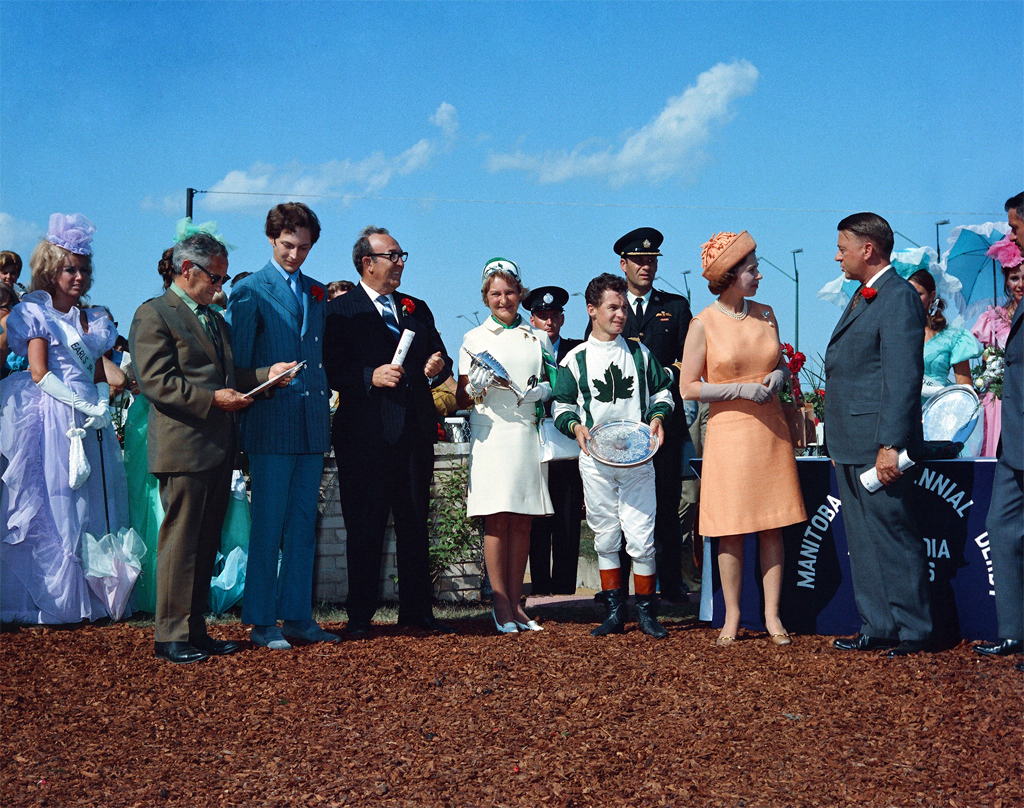 The largest Manitoba Derby Crowd ever turned out to see Queen Elizabeth II on July 15, 1970. The Manitoba Derby is a month away and what better time to look back at the history of the premiere race of the season. The 2018 edition of the Derby is the 70th running of what was once called "The Run for the Tartn."

This week's blog post provides an array of facts and figures and a glimpse of some highlights of Derbies past. In addition, in the weeks leading up to the August 6 race of races, each new blog story will feature a special Derby memory.

2018 is our 61st season and the Downs has played host to the Derby ever since Jack Hardy revived the race in 1960. A quick check of the math reveals that 59 Derbies have been run at the Downs, if we include the 2018 edition. History tells us however, that 11 more Derbies were run from 1930 to 1940. Put it all together and you have 70 Derbies. Derbies from 1930 to 1940 were run at old Polo Park racetrack, apart from 1937 when it was run at Whittier Park in St. Boniface.

The Manitoba Centennial Derby featured a trip from the Royal Family, and Queen Elizabeth II presented her "Queen's Cup" to Jean-Louis Levesque, the owner of the winning horse, Fanfreluche. Fanfreluche was the first filly to win the Derby since Jack Hardy's revival of the race in 1960. The Centennial Derby crowd of 11,127 is the largest Derby crowd in Downs history.

The well bred son of Fanfreluche followed in his mom's footsteps by adding the Manitoba Derby to his list of accomplishments, but he bettered mom by also winning the Queen's Plate. In 1970, mom only managed a second-place finish in the Plate.

Giboulee was the only Manitoba Derby winner to have run in the Kentucky Derby. He ran 7th in the "Run for the Roses" and was one of 15 horses who took on Seattle Slew. Slew would go on to win America's Triple Crown in 1977. 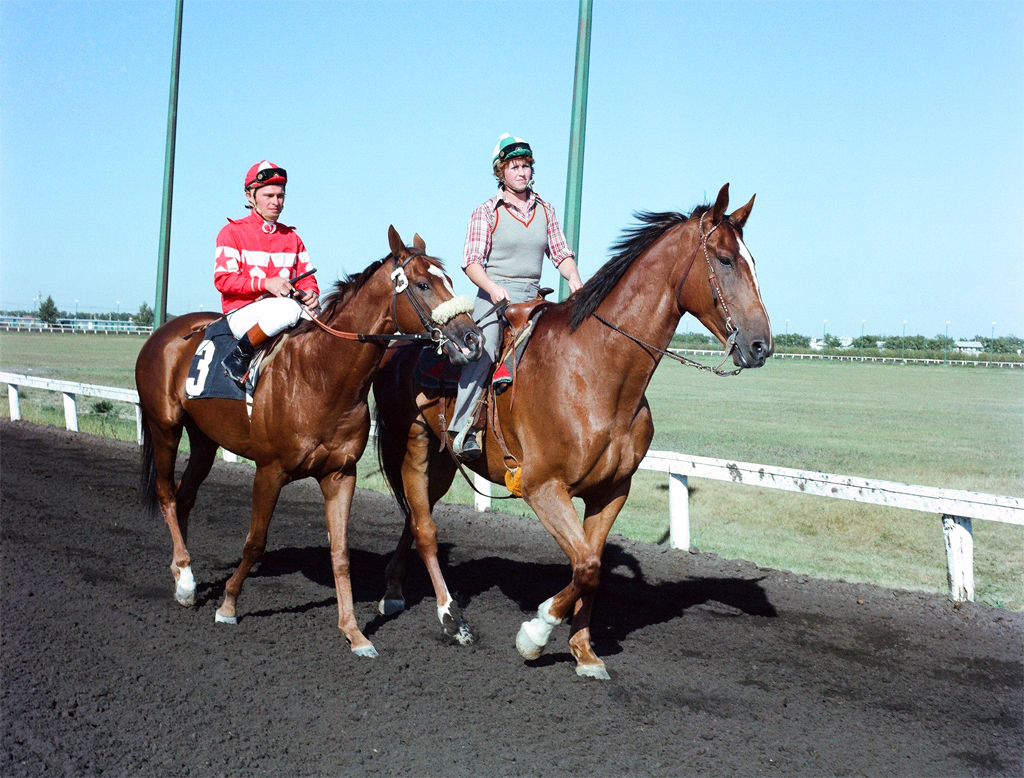 The big news on this Derby Day was not so much the winner of the race, but the loyal Downs supporters who wagered $1,106,999 on the card. It was the largest single day handle since the Downs opened its doors in 1958.

The following headline appeared in the Winnipeg Free Press on November 17, 1971:

'73 Manitoba Derby To Be Richest Ever

"On Saturday July 14, 1973 - the 25th running of the Manitoba Derby - racing fans will see the richest race ever run in Canada.

J. C. Hardy, president of Assiniboia Downs, announced Monday that the quarter century running of the Manitoba Derby would carry a guaranteed purse of $100,000.

On the same day the Toronto Star made the following pronouncement:

"Unless things change in the meantime, the Queen's Plate won't be able to call itself Canada's richest thoroughbred horse race much longer.

…The Plate, run each June at Woodbine, usually is worth around $80,000. Of that total, $50,000 is put up by The Jockey Club and the rest is made up of nomination and eligibility payments. The winner usually collects roughly $55,000."

Fear not, Queen's Plate supporters’ plans were put in place and in 1973 the Plate was changed from a $50,000 race to a $75,000 added money event. The revised purse structure together with the usual payments one again secured the title of Canada's richest horse race for the Queen's Plate. Needless to say, all those east of the Manitoba/Ontario border slept well again!

Julie Krone became the first female rider to win the Manitoba Derby when she rode No Malice to victory in 1988.

And there you have it, everything you’ve always wanted to know about the Manitoba Derby…

But were afraid to ask! 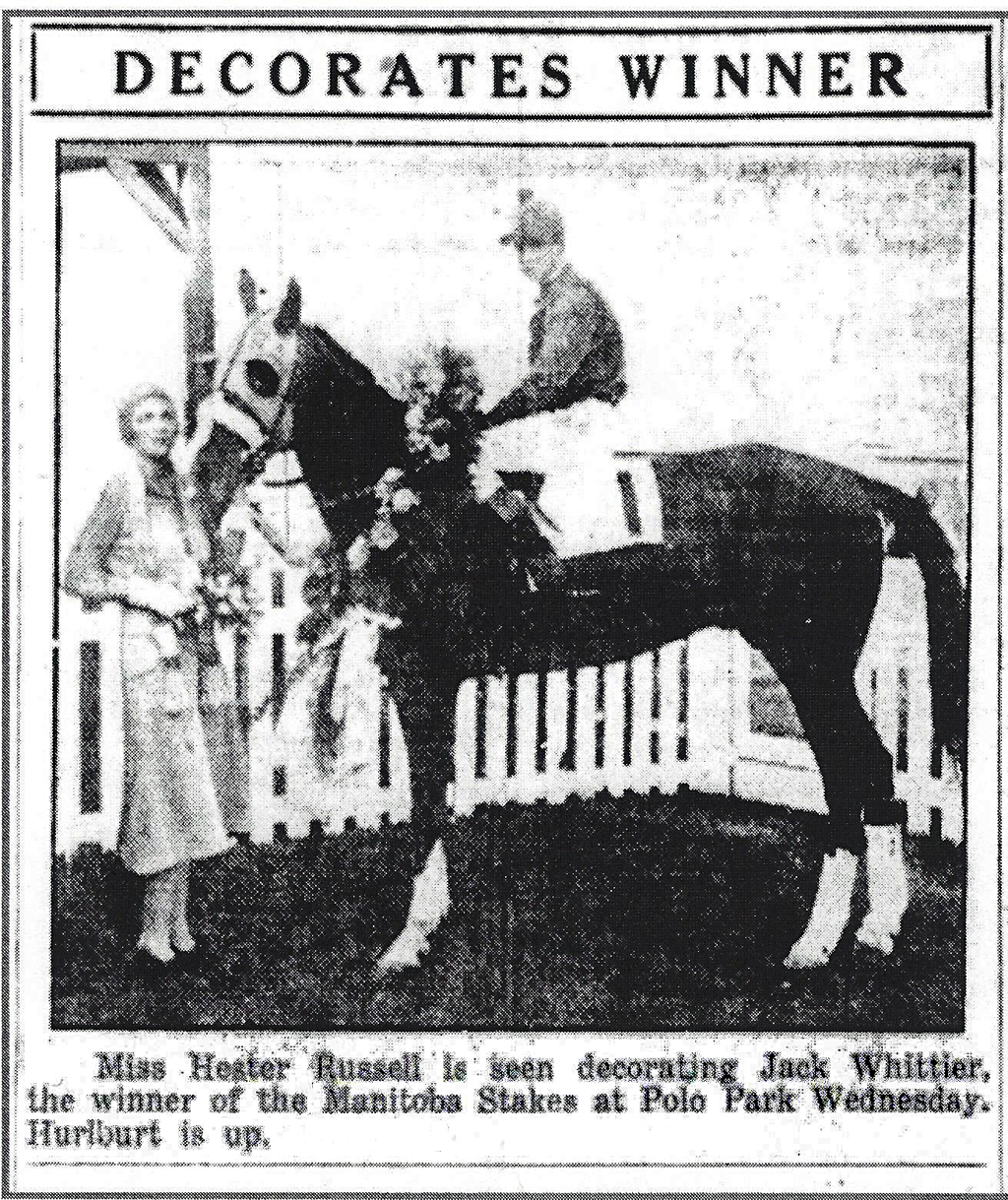 Jack Whittier, first winner of the Manitoba Derby in 1930.