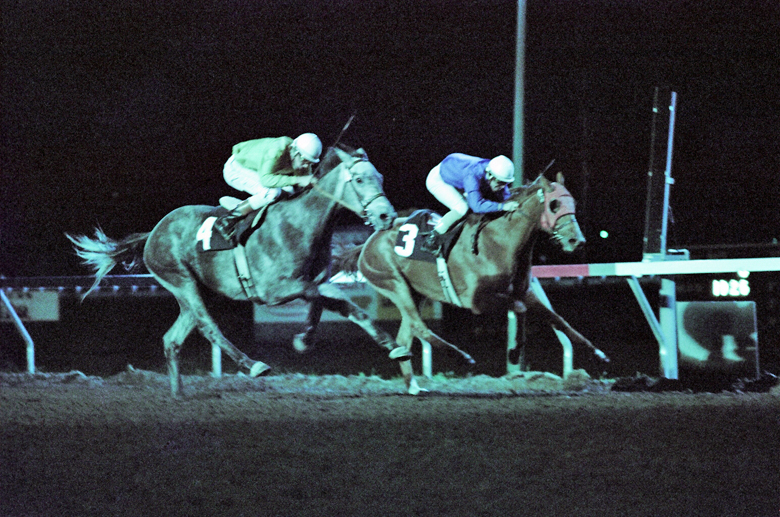 Mr. Macho and Northern Spike's two-year rivalry at Assiniboia Downs was a classic.

How fair is it to compare these two? The simple answer to that question lies somewhere between "probably not very" and "who knows," but in the horseracing biz, it's what we love to do.

Spike was a Manitoba-bred and Macho was bred in God's Country, aka Ontario. Spike was a sprint specialist who would run on any surface. He excelled at distance up to six furlongs. Macho didn't get his juices going until after he'd gone at least two turns. The further, the better for the grey gelding. Macho's distance of choice was 1 1/8-miles or further. Running surface? Macho loved the turf, but often ran on dirt and had a definite preference for a "fast" racing strip. No mud for this boy. Spike set four track records during his career at the Downs. As a three-year-old (1980) he set the record for about seven furlongs. In 1982 he set new marks for four, five and six furlongs. His record romps for four and five furlongs still stand today! His four furlong time of :44 2/5 equaled the world record for a half mile and his five furlong record of :56 2/5 was a Canadian record that stood for many years.  Mr. Macho won many races at the Downs, but there were no track records for him. 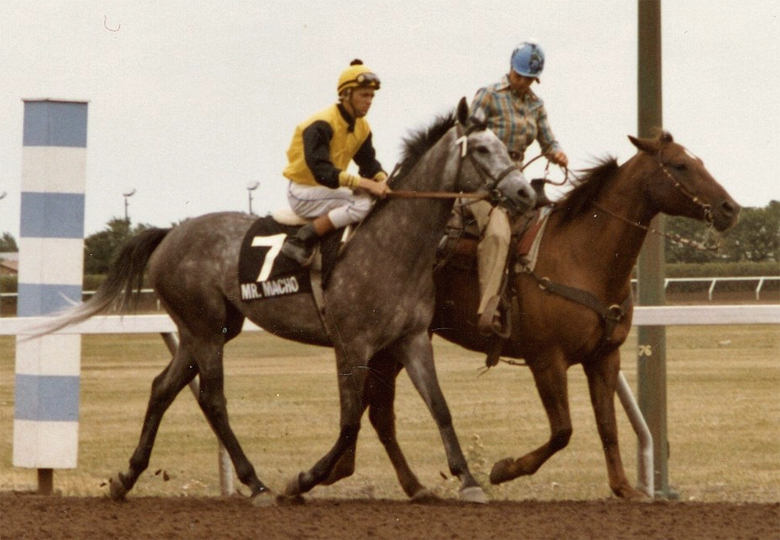 Mr. Macho goes to post for the 1980 Manitoba Derby. Irwin Driedger up.

In 1980 it appeared that both Macho and Spike had legitimate shots at the Manitoba Derby, but western star Country Free's powerful stretch drive dashed the hopes of our local favourites. Macho finished second and Spike ran third. Irwin Driedger on Mr. Macho lodged a claim of foul against the winner for interference, but it was disallowed.

Spike's excuse? I've heard the story more than once and it goes like this: at the top of the stretch Spike was on the lead and it was his race to lose. Once he was challenged by Macho and Country Free, his rider, Clifford Thompson pulled out his stick and went at Spike hard. Some said it threw the copper-brown bay gelding off his stride and killed his chances of victory. Who knows?

But the classic race for these two fierce competitors came one week before the Derby, in the Manitoba Derby Trial. By any standards you want to use, the race was a pure masterpiece.

The July 25, 1980 match up in the Trial treated almost 6,000 patrons to what amounted to a match race. There are no adjectives to adequately describe the race and the herculean efforts exerted by the two combatants. It was unfair that one of them had to lose.

Macho headed Spike twice in the stretch drive only to see Spike fight back and regain the lead. Then Macho dug deeper and found the place where special horses go when the tank is on empty. The photo finish camera was needed to call the winner and the head-bob went to Macho. What a race, what a stretch drive and what a finish! The real winners that Friday night in July were those who witnessed one of the finest races ever run at that Downs. Just a few last stats before wrapping up:

It has been incorrectly reported that Spike was the first Manitoba-bred to win $100,000.  Thanks to Dr. Ross McKague, we know this is wrong. That honour goes to Hasty Rick.  But Hasty Rick never ran at the Downs, and Spike did, so we'll employ the "asterisk" rule and give this "record" to Spike. Northern Spike with trainer Phil Hayek. A much loved horse.

So who was better?