The Magnificent Seven – Riders at ASD

Cue the main theme and seven of the most successful riders in the history of Assiniboia Downs make their entrance on the stage that is our humble 6 1/2-furlong oval.

This season marks our 58th year of operation and in that time seven jockeys have won more than 1,000 races at the Downs. It's an exclusive club! The Magnificent Seven who top the All-Time Jockey Leader Board by number of wins are:

These men have a special place in Downs' history and Rohan Singh remains the only active rider from the group that combined account for 11 riding titles. Tim Gardiner tops that list with four championships, Rohan Singh follows close behind with three, Hendricks has two and singles belong to Bird and DesAutels. Collectively this group has ridden at the Downs for more than 150 seasons. That's a lot of history!

Here's a glimpse of our all-star cast we call the Magnificent Seven: What more can be said about this Prince George, B.C. native that hasn’t already been said. "Hank" was born June 22, 1949 and after 34 meets at the Downs hung up his tack in 2008. Quite simply, no one will ever top his 1,666 wins at the Downs. Why? Because of the top 20 leading jocks, only two are still active, Rohan Singh and Jerry Pruitt, and they aren't even close. This is one record that wasn't made to be broken.

In addition to his two riding titles, Ken won the Manitoba Derby twice, with Merry's Jay in 1976 and aboard Langara Island in 1995. He also won a record seven Gold Cups, another feat that will likely stand the test of time for years to come.

The last word here belongs to the late great trainer, Don Gray. In 1989 Gray said that he never had a client ask for Hendricks to ride their horse, but that didn’t matter to Don, he'd just talk them into it! Don Gray knew Hank was the best "go to guy" in the business, a real "money rider!" 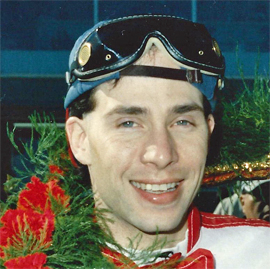 Tim has Downs' all-time leading trainer Gary Danelson to thank for his nickname. Not to mention, that his win total benefited greatly from his close association with Danelson, for whom he rode first-call for a number of years.

In addition to his riding skills, Gardiner will be remembered for being a fine judge of horses. Gardiner picked out Silver Charm for C.J. "Shorty" Gray and partners in 1996. Gray and company only owned the grey for three weeks, before selling him for a tidy profit. Silver Charm went on to win to the Kentucky Derby and Preakness for trainer Bob Baffert and his connections in 1997.

More recently Gardiner, through his ties to Baffert, was responsible for Triple Crown winner American Pharoah's halter finding its way to Winnipeg to aid the Alyssa Selman Benefit Fund.

So who is Tim Gardiner? When approached for a special memory Tim had a lot to choose from. His pick? Well, he had fond memories of a race he won for owner/trainer Vic Price, a man who at the time was a little down on his luck. He remembered what that win meant to Price. This past May we lost Victor Price, but Timothy N. Gardiner will always remember that win, and that says it all.

He's a special person with a huge heart and happily he and his family continue to call Winnipeg home. This native of Hamilton, Ontario started his career at the Downs in 1975 and retired at the end of the 2000 season.

Tom had a gift that saw him perform well, especially with route horses such as Smoky Cinder, Proven Reserve, Electric Fever and Buck Domino. Over the years he rode for some of the best local trainers, like the late Don Gray, Bert Blake and Gary Danelson. Gary always liked Tommy! Frankie was born in Waco, Texas on August 24, 1950. His long time agent, the late Larry Oberlander, said that Frank was the best jock to ever ride at the Downs. Biased? Possibly, but Larry truly believed what he said!

Frank's father, Tony Licata also rode horses back in the day at old Polo Park in the 1950s.

Frank rode regularly for stables trained by the late Mike Smith, as well as for Sandy McPherson. In 1994 Licata scored win number 1,000 at the Downs. The horse, Angels Have Souls, also happened to be the last horse his pal, Mike Smith, had named.

Licata has won the Manitoba Derby a record three times, in 1991 with Plenty Chilly, in 1996 aboard Northernprospector, and in 1999 atop Wafare Warrior. The 1991 and 1996 wins came when he rode first-call for K5 Stables. In our list of seven, Jacques is the only Manitoba-bred, having been born in St. Boniface. He won his leading rider title in 2002 and was always one of the more popular saddlesmiths in the "room."

DesAutels' win totals don’t tell the whole story. He took a 10 year break from racing at the peak of his career so he could spend quality time with his family. His final season was 2003. During his stellar career he rode for J.H. "Red" Johnson, Tom Dodds, Brian Palaniuk, the late Don Gray and Mike Smith. Those trainers would look pretty good on any rider's resume. Rohan was born in Guyana, South America and is the only active rider in the group of seven.

The winner of three titles (2000, 2001 and 2005) is the son of Joe Kanhai, also a jockey, who rode at the Downs in 1978. Singh, his mother's maiden name, is a wily veteran who is a great judge of pace, as was proven when he rode Miss Missile to all of her stakes victories at the Downs just a few years ago.

Only time will tell how far up the ladder he'll climb, but his 33 wins this year have moved him past Larry Bird in terms of total wins at the Downs. He's ridden for top stable K5, and a few years back rode almost exclusively for 12-time leading trainer Ardell Sayler.

Rohan is one of the greatest money riders to put his feet in the stirrups at the Downs. He rode one of the best horses in Downs' history with Clint Wilson's Kalfaari. He is a top rider who would be a welcome addition to any jockey colony on either side of the border, and yet he finds himself returning to the Downs on a regular basis because he finds our track "infectious" and we're happy for it! Larry has one Manitoba Derby to his credit (Royal Frolic 1993) and according to Downs' Patriarch, the late Bert Blake, if Bird had put his mind to it he could have had so many more wins! Blake knew the business and there were two jockeys he swore by, the first was the late Bobby Stewart and the other was Larry Bird. Blake liked "Birdie" who spent 29 seasons plying his trade at the Downs.

You can still find Larry on the main floor some race nights visiting with old friends and telling tales of the past, but not about racing. Larry had another passion in life, the great outdoor world of hunting and fishing. These days he admits to being pretty content, knowing he doesn’t have to watch his weight any longer.

And there you have it, the members of the Downs' 1,000-Win Club. Move over Yul, Eli, Steve and company and make room for the Assiniboia Downs' Magnificent Seven…

some of the best who ever rode at the Downs!