Wondrous Wednesday – Oh What a Night! Isn't it sweet when everything clicks and you can do no wrong?

Well, Assiniboia Downs can boast of at least five jockeys who experienced a rare combination of skill, luck and whatever else is required to achieve an evening of greatness.

This week we recall five such events for five different riders, who had that once in a lifetime experience at the Downs, a night where they were as close to perfection as you're likely to ever get.

What better place to start than the diminutive giant who holds the record for most wins on a single card at the Downs, Minnesota native Jim Sorenson.

June 23, 2016 marks the 40th anniversary of Jim's record romp. It was a warm summer's eve in 1976 when Jim put it all together like no one before him had ever done. The 22-year-old rode in all nine races that Wednesday night and chalked up seven wins.

Last season I did a blog story on Sorenson.  Interestingly enough, we received three responses from people who knew Jim and gave us a little more insight into the "Mystery Man."

Jim's daughter, Amber proudly acknowledged, "That's my dad." Danny Sorenson, Jim's older brother offered, "Jim is alive and well and is living in northeastern Arizona outside of Show Low." Lastly, Bill F, a longtime friend, said that Jim was "the biggest little man" he knew. It was great to get these updates on the man who rewrote the record book forty years ago. Lost amid Bob's flurry of trips to the winner's circle was the fact his mount, Toy Stand equaled the track record for six furlongs. This was no small feat, as that record (1:10 2/5) stood for 15 years (September 19, 1958 to May 21, 1973) and during that period was equaled no less than six times.

As near as I was able to confirm, only three other jockeys managed to score six-baggers, and they aren’t necessarily who you might expect.

First up is Salvador Rodriquez, who at 33 went a perfect six-for-six on the nine-race card that took place on May 18, 1983. Yes it was another Wednesday, but Rodriquez didn't have an easy time of it. He had to survive two claims of foul, as well as boot home two horses that paid more than $20. The 1984 season saw Rodriquez win top rider honours with a total of 126 victories. A year later on August 8, 1984 Tom Adkins had his best night ever at the Downs when he too rode six winners. Tom's effort came off seven mounts on the nine-race card, and of course you know it was another Wednesday night!  Oddly enough Tom never managed to win a riding title in his years at the Downs, but he is one of only seven jockeys to win more than a 1,000 races at our local oval. 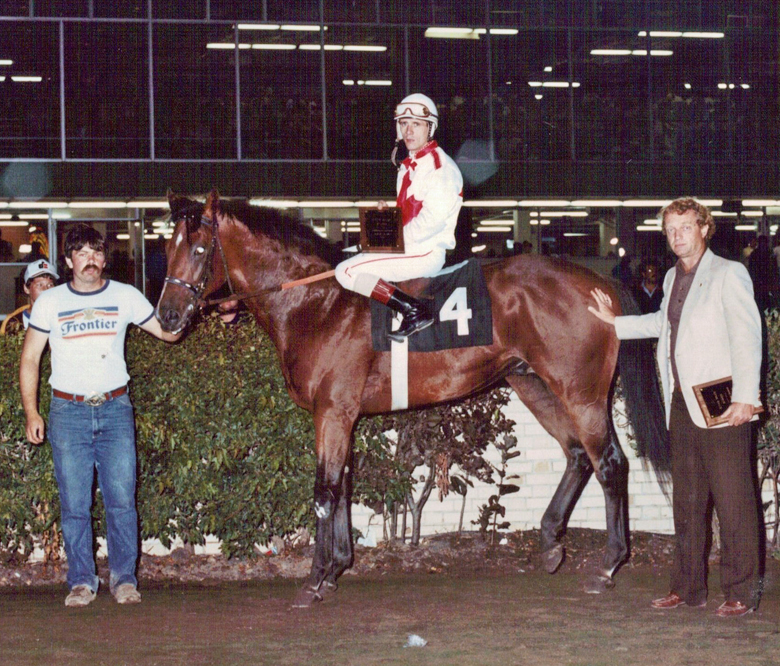 The late Alan Cuthbertson, who had not quite tuned 61, rode six winners from eight mounts on the eight-race card. Not to mention, he also managed to post a second place finish!

I know what you're thinking… Alan accomplished his feat on a Wednesday, right?  Nope. There was no racing on Wednesday that week, so he did the next best thing. His sextet came on the Tuesday night card. As we close out this week's peek at history, I have to mention that something freaky nearly happened this past Friday night. I had all but put the above column to bed when Chris Husbands launched his assault on the record books. In his effort to join the above group Chris had his own evening to remember.

Chris recorded five wins and two thirds from eight mounts. His game effort is a brief reminder of just how tough and special it is to string together six or more wins on a single night of racing.

And there you have it.  Did I miss anyone?  I hope not! One thing is for sure, this quintet of riders had their own special day at the races, where each can proudly boast…

With apologies to the Four Seasons.