Following the death of one of the most popular and respected men in the history of thoroughbred racing in Western Canada in July 1977, Winnipeg Free Press sports editor Maurice Smith wondered, “Who among the loyal followers of horse racing in Winnipeg would know the name Lou Davies?”

Fast forward 40 years and only those with superior racing knowledge or with memories of Polo Park and Whittier Park will remember the name Henry Louis Davies.

Robert James Speers is rightfully credited with the birth of modern-day thoroughbred racing in western Canada, but if racing mogul Speers was the brains and face of early racing in Winnipeg and parts west, Lou Davies was an integral cog in the Speers machine that made it happen.

So, who was Lou Davies and why is he worthy of our praise?

Henry Louis Davies was born February 8, 1900 in Birmingham, England to Llewellyn and Florence Davies. The family arrived in Canada in 1904 and settled in Montreal, where Davies grew up.

Davies’ introduction to the racing business and big break came on June 3, 1924.  On a day when his luck with the ponies had been better, he made a fortuitous $20 wager on a horse called Drummond in the final race of the day at Hull, Quebec. In one race his fortunes turned around and Davies collected a handsome $271, which today would be worth  $4,053! But the best was yet to come.

The trip home to Montreal led to a chance meeting with Herbert Lister, the originator of the past-performance program which was being used at eastern tracks. The two young men were quick to strike up a friendship, with Lister offering Davies a job as his chart caller and partner. Before long the men had a thriving business. More importantly for the west, they sold Robert James Speers on the concept and the charts were established at all of Speers’ racetracks. In 1925 Lister and Davies moved west. For Davies, this would be the beginning of his business association with R. J. Speers.  In addition to the past-performance charts, Speers made sure he corralled Davies to work as a chart caller at his tracks.

Under Speers, Davies acted in many different capacities on the old Prairie Racing Circuit, which included Winnipeg, Calgary, Edmonton, Regina and Saskatoon. The "form chart" man was a chart caller, handicapper, advance and publicity man. Following the death of Lister in 1936, Davies took sole possession of the past performance charts, but Davies was a success at anything he put his mind to.

Davies did his chart work from the "crow's nest" high above the crowds at Polo Park and Whittier Park. He had the gift of a photographic memory and could remember the colours of every owner at a race meeting, he was also able to give you the name of any horse running in a pack, and he was as good a judge of distances between horses as ever existed.

In addition, Davies was an excellent handicapper whose daily selections were done under the pseudonym "The Yorkshire Lad."  His racing picks appeared in the dailies in all of the racing cities on the prairies.

"Mr. Davies is one of the most zealous publicity men in the Western Hemisphere, and if you allowed him to sit over in a corner for five minutes and think it out, he'd come up with a rational ground for believing the bombardment of Shanghai means a bigger and better field in the 1940 Manitoba Derby."

Davies had "it." That certain something that allowed him to get along with the press, horsemen and the $2 bettor. He was a friend and confidant to all.

In 1939, Calgary horseman Harold "Spud" Murphy's old campaigner Joe Geary broke down in a race at old Whittier Park. Spud knew his old friend's career was done, but rather than sell him off at rock bottom prices with a questionable future, he borrows $20 from Davies and paid the track vet to end old Joe's suffering.

Did Davies ever get repaid? We'll never know for sure. Floating a "loan" to a horseman in need was a fairly common practice for Davies, and you just know there were many times when he never saw that money again. But, that's what he did.  He was there when friends needed him. He was that kind of guy.

In 1950, following the death of Charles Roe, Davies was named Operating Manager for the R. J. Speers Corporation at their tracks in Winnipeg, Calgary and Edmonton. Davies and Speers were a good fit, like horse and saddle, with both men strongly believing that "if you don’t have integrity, you don’t have anything." 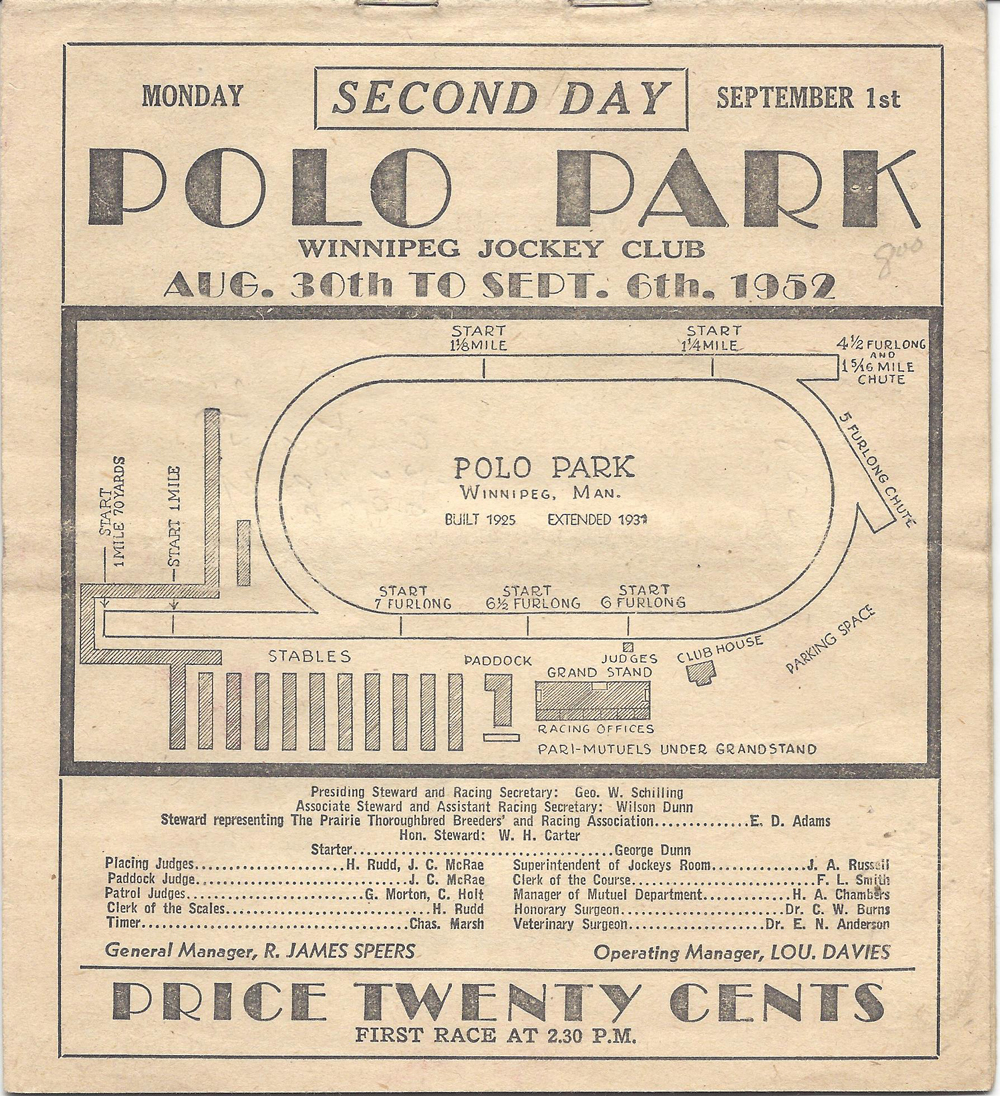 Davies went to work streamlining the Speers' operation at Polo Park, all to the advantage of the betting public. He addressed admission and parking issues, increased seating capacity by putting additional benches on the lawn in front of the grandstand and added more selling wickets to accommodate the crowds at Polo Park.

And under the category of “what's old is new again,” there was the recurring complaint about reducing the length of time between races. Imagine that!? At one point it was so bad that chart caller Denny Layzell quipped, "If they don’t let them start pretty soon, I'm going to have to change the age of the horses in the form chart."

Davies was successful in reducing the time between races and when it was announced that wickets closed in 5 minutes, it wasn't the usual 15 or 20 minutes that it used to be.

Following the death of Speers in 1955, Davies was appointed V. P. of the Speers Corporation and General Manager of Racing Operations at Polo Park, Edmonton and Calgary.

With Speers' death and the prospect of no racing in Winnipeg in 1957, Davies was the obvious choice to head up the newly formed Western Canada Racing Association (WCRA). The mandate of this non-profit organization was to control thoroughbred horse racing on the prairies under the respective exhibition associations at Calgary, Edmonton, Saskatoon and Regina.

Davies relocated to Edmonton and was General Manager of the WCRA until poor health caused him to retire in 1971. When Assiniboia Downs opened in 1958 in Winnipeg, Jack Hardy and company opted to leave the comfortable confines of the Prairie Racing Circuit and go it alone. Davies was one of eight men honoured by Assiniboia Downs for their contributions to horse racing when Jim Wright took over the Downs in 1975. In 1976 he was honoured by the Jockeys' Benefit Association as "Man of the Year" and by the Edmonton Exhibition Association as one of its “Builders." The crowning glory came in 1977 when Davies was inducted in the Canadian Horse Racing Hall of Fame in the "Builder" category.

On July 20, 1977, Davies’ failing health got the better of him and the Yorkshire Lad CCR left us for the "fast track." While it may not have been an official designation, Henry Louis Davies was indeed a CCR (Chart Caller of Racing).

More than a half century of racing history has seen the name Lou Davies fade from the memory of Winnipeg race goers. Today we remember and thank him for 50 years of dedicated service…

To the sport he loved.