A Salute to Assiniboia Downs 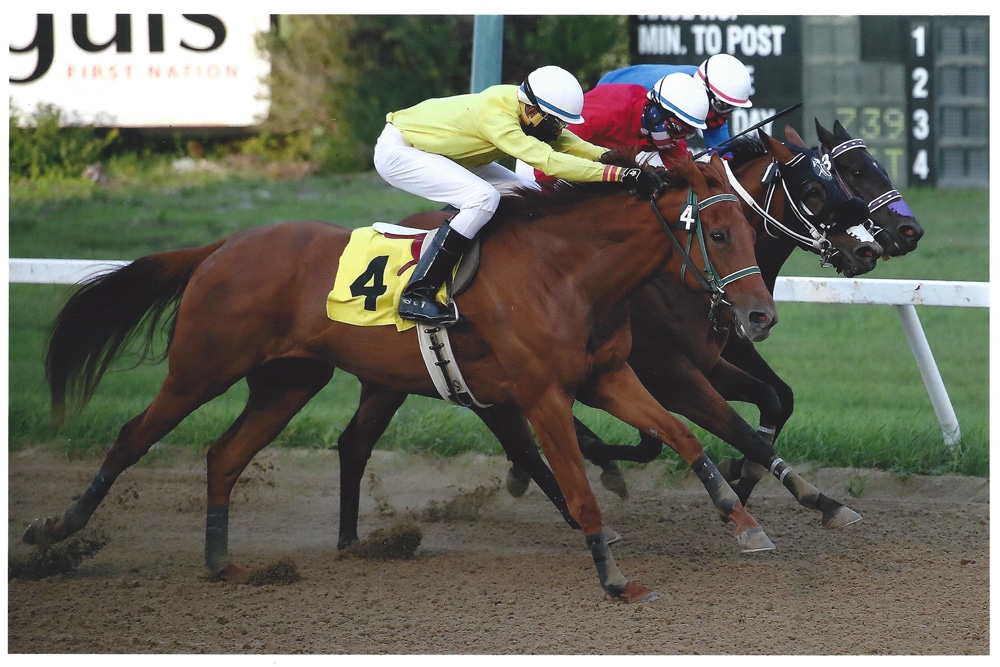 The 2021 season at ASD is nearing the finish line.

"The time has come," the Walrus said,

"To talk of many things:

Of shoes - and ships - and sealing-wax -

Of cabbages and kings -

And why the sea is boiling hot -

And whether pigs have wings."

My late father loved this quote, yet I'm sure he had no idea what Mr. Carroll meant or for that matter how it fit into the rest of the poem, The Walrus and the Carpenter.

Dad used it when he had something important to say. I think it was his way of making sure we were paying attention and the quote suits our purposes today just fine.

Assiniboia Downs has spent the last two years dealing with the challenges of a global pandemic. I prefer to use to the word challenge rather than problem, obstacle, difficulty, or trouble, because these words carry a negative connotation that might make defeat somehow easier to accept. Nope, that wouldn't work for the "little track that could." Covid was a challenge and one that the Downs met head-on going a 100 mph.

In the last century of horse racing in Winnipeg the covid challenge was unique, unparalleled, without equal, extraordinary -- feel free to pick your own adjective.  Historically the Downs and its predecessors have always had to deal with weather-related issues. Thing is this involves a day, or two, or maybe three.

Robert James Speers had the Great Depression and a World War that menaced his horse racing operations. The end result was that it cost him one day's race card on June 6, 1944.  Neither the Depression or WWII were a serious threat to the sport or Speers' ability to deliver his race meets. On the other hand, the Downs has survived the foreclosure proceedings that shuttered the track from July 14 to July 23, 1982. Then there was the press box inferno that scuttled racing from May 17 to May 28, 2004. Not enough pain and suffering? Let us never forget about the battle the Downs had with the Red River Exhibition and the previous provincial government in 2013.

All this and the Covid-19 pandemic, that's more than any organization should have to endure! A lesser soul would have thrown in the towel, never mind find a way to break a record for money wagered for the 2020 racing season. The easiest thing would have been to do nothing and call off the race meeting, but that was never an option that received serious consideration.

Here's what Downs CEO Darren Dunn had to offer on the Covid crisis:

"Nothing short of an epic challenge. A true big picture chess game played out over what will be 18 months and counting. There are not enough adjectives to describe the emotional and strategic challenges covid had created. From staff layoffs to revenue area closures to designing safety protocol strategies from scratch and on-the-fly at times and so much more.

“However, the pride in finding a path, being able to survive -- even thrive in certain areas and very importantly being very close to delivering an exposure-free environment in back-to-back race meets with such a diverse population from so many different areas accessing the front side and backstretch -- when many of the big sports leagues had rampant positives and lost games. It is truly career satisfying and something I will never forget.

“I would also like to think that moving forward we may be very well prepared to really thrive in 2022. Once again it proves that this industry can take a punch and still stand up and it is a true testament to the resilience of everyone involved." No fans in the stands at ASD? Yes, it happened.

And for those of you with a keen eye you'll notice I left out a name. Who, you might wonder? Well, it isn't Darren Dunn or Harvey Warner, they have been given credit in previous stories and this one is dedicated to "the staff of the Downs."  The missing name is none other than, Sharon Gulyas.

Sharon got her start with the Downs as a main-line cashier, let's say a little while ago and leave it at that. It's safe to say she's had a number of years of service (and you’re not going to get any numbers out of me on this one) and you'd be hard-pressed to come up with something at the track that Sharon hasn't tried her hand at.

At this point I'm going to turn it over to Darren Dunn for his thoughts:

"She is a total team player who is able to multi-task at the highest of levels. Though she is the V.P. of Finance and Gaming, her role involves contributions in all areas. A strong administrator who adds value, outside of finance, to the live and simulcast departments, the VLTs area, marketing and special events. A tireless worker who has already and will continue to do 'whatever it takes' to make the Downs as successful as possible."

To all those mentioned above and the many others whose names do not appear in the racing program, we thank each and every one of you!

The Downs continues to meet whatever challenges are thrown its way. You get to a point where the racing gods have hopefully run the gambit. Maybe it's time they throw us a bone. Lord knows the Downs has it coming. Sun sets on Assiniboia Downs after another successful season.

This is my final blog story for the year as the 2021 race season #64 draws to a close on Wednesday, September 15th.  While I'm done for the year, there's always plenty to do at the Downs in the off season. So be sure to keep an eye out for what's happening at the Downs, be it VLTs, simulcast wagering or dining specials, until the ponies return next spring for season #65.

Above all, thank you for reading, and Assiniboia Downs…