There's a common thread that links books written to honour champions of the past and our humble blog stories. Both remember special equines from the early days of the Winnipeg racing scene who have long since passed.

Not this time around!

This multiple stakes winner and son of Flashy Bull is very much alive and living out his retirement on a farm in the Springfield area. The bay gelding turned 13 this year and we're told he's doing fine.

"Simply the Best," that's pretty heady stuff. Before completing our update on Balooga Bull, lets remind ourselves why he is so deserving of our respect. If you're from the camp that wasn't much of a fan, we'll see what can be done to change your mind. Besides, it must be awfully lonely out there in camp "Nowhereville."

Of Balooga Bull’s 27 lifetime races, 21 took place at Assiniboia Downs. The Portage Avenue oval was his home. The other six races were the last of his career and forgettable. They had nothing to do with the Downs, so we're going to forget them.

The Sayler School graduate's Downs’ record was unbelievable; 16 wins, 3 seconds and a third from his 21 starts. Who’s ever heard of a horse with win rate of 76% and an in-the-money mark of 95%? Of the five races Balooga Bull didn’t win here, three were won by Pleasant Closing and two by Magic D' Oro, both exceptional horses in these parts. Balooga Bull won 11 stakes including the Winnipeg Futurity at two, the Manitoba Derby at three and the prestigious Gold Cup three years in a row from ages three to five. Before the Bull came along no one had won the Gold Cup three times, let alone three years in succession. In addition, he was twice named the Downs’ Horse of the Year and he was one of only three horses to win the Winnipeg Futurity and the Manitoba Derby.

At the beginning of his career, Balooga Bull won nine of his first 10 starts. His only loss came in the Harry Jeffrey Stakes (the Manitoba Derby prep) where he finished third, but with an explanation. Trainer Ardell Sayler and jockey Paul Nolan thought the Bull should be rated, so he'd have some finishing kick. After all this was his first time going two-turns.

That experiment was an epic failure. The Bull would have no part of it and Nolan found himself wresting with his mount all the way around the track. The Bull fought his jockey every step of the way, decided he had enough and pouted his way to a disappointing third-place finish.

Other than that little blip, his record was solid. As a 2-year-old, he was undefeated, going four-for-four, as a 3-year-old he won five of six, at 4 he won three of five and as a 5-year-old he won four of his six races.

The trio of Bull, Ardell Sayler and Paul Nolan were a force to be reckoned with from 2012 to 2014.

It wasn't a coincidence that the Bull raced mostly at the Downs. He shipped poorly. He would go off his feed for a week, which doesn't work so well when you’re a racehorse. Actually, the Bull was, and still is, a picky eater.

Arguably the name Balooga Bull doesn't create the most pleasant of images and on many occasions the word "monster" was used to describe him in his races. Sure seems like he could have done better in the name department.

At the time of Ardell's passing in 2019 there was talk of the Bull's return to the racetrack. He would have been 10 and not seen a racing oval in four years.  Mercifully, there was no comeback, and a life of leisurely retirement was going to be his forever.

Sayler once said that the bay gelding was the nicest horse he ever trained and that's saying something when it comes from the man who won a record-setting 12 Downs leading trainer titles, more than 1,300 races and $8 million in purses.

Great care was taken to ensure that the Bull had a safe and caring place to live out his retirement. Enter Dr. Cyndi Kapser, who relished the opportunity to help care for him at this time of his life.

"He was a special horse to a lot of people." - Dr. Cyndi Kasper Kasper is high in her praise for the Bull's caretaker, who tends to his needs and keeps him healthy. Were it not for people like Dr. Kasper our retirees from the racetrack would sometimes face a bleak future. There are no words that adequately describe her generosity and the goodness that exists in her soul. Cyndi, you make my heart smile. Thank you for all that you do!

We're told he still goes by "Bull" or "The Bull" and he has a girlfriend, who bosses him around. But maybe we can keep a low profile on that little tidbit, the man's entitled to some dignity and a little privacy.

Bull has the best life a horse could have at this point. Two horses enjoying each other's company, sharing 20-acres. Does it get any better?

Of the Bull's 21 races at the Downs, jockey Paul Nolan rode him 18 times, and nobody knew him better.

There's a road trip in my near future and a plan to visit the son of Flashy Bull. So I contacted Paul and asked if he had a message for his old compadre. 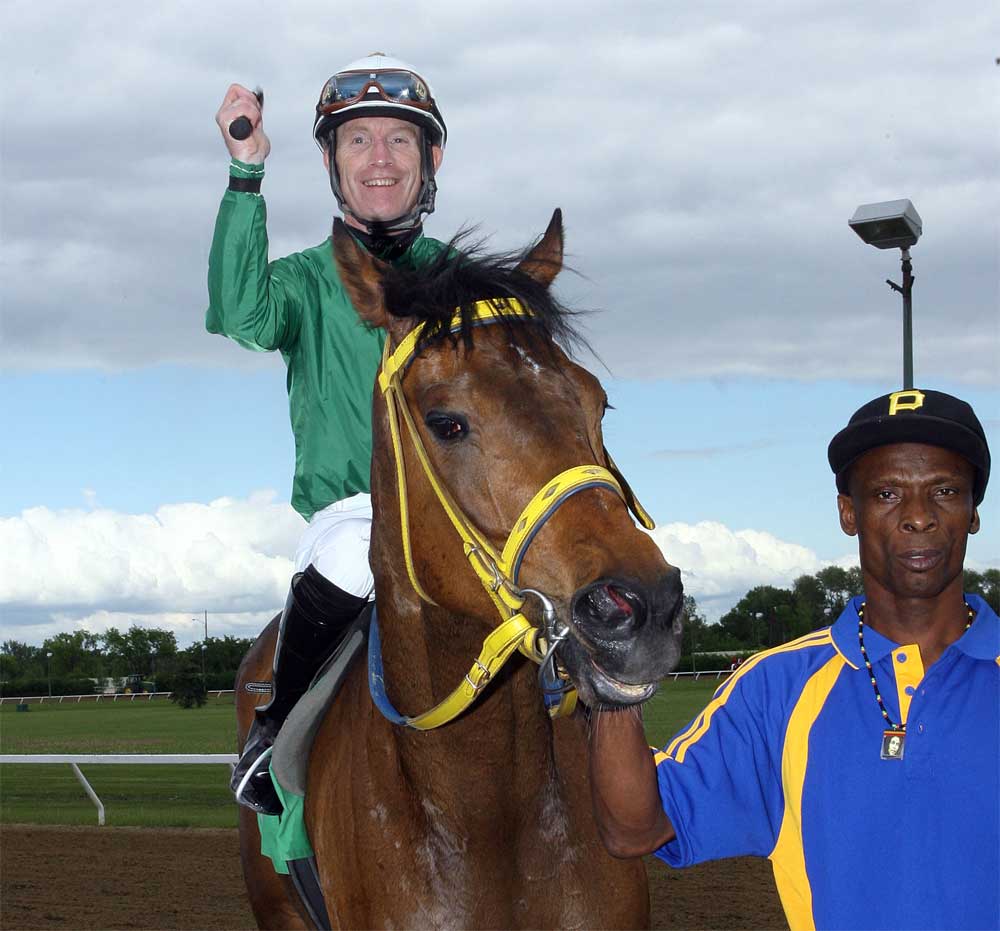 Balooga Bull and jockey Paul Nolan had plenty to celebrate.

"Tell Boo (only I called him that) that I love and miss him, even though he could be a pain in the butt sometimes. It was his way or the highway.

I wouldn't change our three seasons with each other, for all the money in the world. We knew and trusted each other 99% of the time. I truly felt that we were one together. A feeling that I will never forget, my friend.

Thank you for always giving me your best. I hope you feel the same.

We had one heck of a Great Ride together. You will always be #1. (Typed with tears in my eyes)"

"Best there ever was, the best there will ever be!”