Dawn Marches On wins the 1982 Debutante Stakes for Hazelridge Holdings and Bob Crockett, second from left of horse.

Quiet and unassuming, that's Robert "call-me-Bob" Crockett. And this friends, makes his story challenging to tell. For the purposes of this history blog that means there's less information about him in the local newspapers, which is a major source of a material for the research elves.

Bob and Margaret Crockett were high school sweethearts and attended Glenlawn Collegiate, as did Bob’s life-long buddy, Barry Anderson. It was through Barry that the Crockets met and became friends with Harvey and Edie Warner. 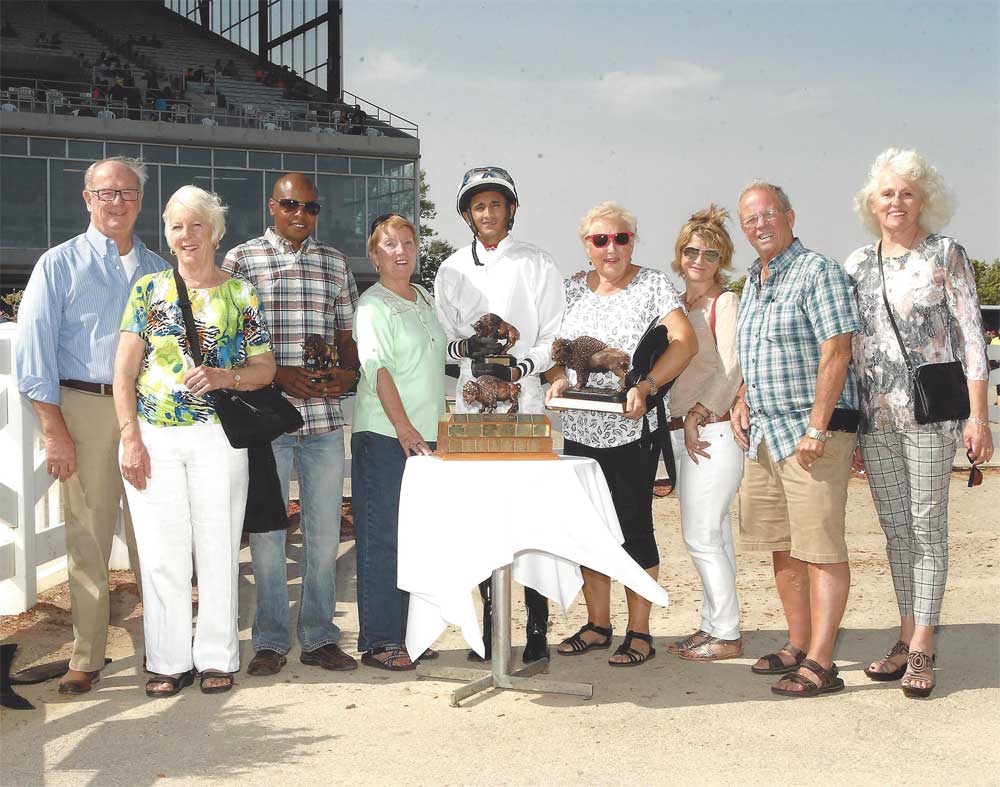 Bob Crocket (second from right) with friends and ownership partners, after winning a stakes race.

The interest in horses was always there, and if the Crocketts were going to go "all-in" on the horse business, a farm was a must. In 1972 they bought a beautiful 60-acre property in the community of Hazelridge that they transformed from a small tin barn and a log house. To the locals, Hazelridge is known as the "Perogy Capital of Canada," but who's kidding who, the RM of Springfield is horse country.

Can't recall the name Crockett as owner? For the most part you won't see Bob's name. In the early days you'll come across Hazelridge Holdings Ltd. And then Right Attitude, which was and is often accompanied by Hillside Farm (Anderson) and the late Harvey Warner. In between there were partnerships, like the "Perfect Ten Syndicate."

With the farm in place, Bob bought his first mare, Bit O' Good from Gary Danelson in 1973. The mare was bred to Herbalist and the resulting foal was a bay colt named Botanist.

Botanist was a horse to remember. How could he not be? The bay was the first horse the Crocketts bred and he broke his maiden in his first ever start in the 13th running of the Fleur de Lis Stakes. Botanist brings back fond memories, even though he raced but two years at the Downs. The colt made 12 starts locally, winning three while finishing in the top three in 50% of his races. Another of the Crockett babies was stakes-winning mare Dawn Marches On. She raced at the Downs in 1982 and 1983 and was also a daughter of Herbalist. This 1980 bay filly foal won the 1982 Debutante Stakes and sported a lifetime record of three wins and a third from nine starts. The filly, whose wins came from the first three races of her brief career, was sold in foal in Kentucky.

The third of the Crockett crop of babies we'll talk about is Royal Amethyst. This roan, just like her daddy Beausejour Boy, was foaled in 1984 and raced at the Downs in 1986 and 1987. In her first year of racing she won twice and finished in the top three in four of her six starts. It was a proud moment when the Crockett barn-mates, Royal Amethyst and Native Ruthie ran one-two in the 11th running of the Stockton Stakes. This time around Bob owned the horses in partnership with the Perfect Ten Syndicate.

In 1995 Bob's Hazelridge Holdings owned California-bred chestnut gelding, Easytodo. The horse won five in-a-row for Bob under the tutelage of Brian Palaniuk, before he was lost via an $8,000 claim. Easytodo would win another four races for his new owner, compiling a record of nine wins and two seconds from 13 starts. Easytodo amassed earnings of $26,258 on his way to becoming Downs "Claimer of the Year."  Who couldn't use a horse like that in the barn?

Who Knew? Regular rider, Kenny Hendricks said Easytodo was one of those horses who was more confident than talented, "way more" according to Hank. Last up is Uncle Gerhard. This chestnut son of Quickasawink was owned by Hazelridge Holdings (Crockett) and Hillside Farm (Anderson) in 1978. This nothing-special boy was a character. Look at his photo that appeared in the newspaper. Enough said.

Once they stopped breeding their own horses, with the last of the babies coming in 1993, it was just natural for the Crocketts, Andersons and Warners to partner on race horses.

Their trainers of note over the years included John Golding, Brian Hutcheon, Mike Smith, Brian Palaniuk and more recently Steven Gaskin. Steve summed up Bob with words anyone would want to hear, "Really nice guy, always there to be supportive… open and easy to talk with."

While not one of his four-legged babies, the Canadian Thoroughbred Horse Society (CTHS) is an organization that is near and dear to Bob's heart. One of the more knowledgeable people in this area is Dr. Ross McKague, who offered:

"Bob and Margaret Crockett were breeding mares and selling the yearlings in Kentucky when I started in the game. They bred and sold high quality yearlings at their farm in Hazelridge, Manitoba.

They were dedicated to the sport and pursued it with a passion. More importantly Bob was a member of the Manitoba CTHS at a time when we had a minimal budget to run an office or initiate incentives.

Bob almost single-handedly produced the first annual Manitoba CTHS sale. A spectacular production, done first class and had a "sold-out" crowd. Bidding was fast and furious and the evening was a gala affair, not since duplicated.

Bob had a herculean task to convert a curling club into a sales arena and stable, which involved portable stalls and Astroturf for alleys.

This is his foremost contribution to the Manitoba industry, but by no means the only one. Don't get me started!

He is an unsung hero to Manitoba racing." Bob Crockett (left) makes a presentation at the CTHS Awards Banquet in the 1980s.

Think Ross might be exaggerating? In 1983, Bob, whose official title for the 1982 sale was Chairman of the first annual CTHS (MB Division) Yearling Sale, was named the CTHS "Man of the Year." He would serve as president of the Manitoba Division of the CTHS and was also a board member for the Horseman's Benevolent and Protective Association in the 1980s. In 2001, Bob was among those honoured by the CTHS for his 25-year membership in the organization.

Bob and Marg are also long-time supporters of the Final Furlong (FF) organization, even before daughter Cindy joined. This is one of those situations where the apple doesn't fall far from the tree.

The current FF board consists of April Keedian (President), Allan Gray (Special Projects and Breed Promoter) and Cindy (Secretary-Treasurer). What makes this trio special is not just the incredible individual strengths each bring to the table, but their collective force, which makes the FF a juggernaut of an organization.

You may have noticed that our story this week dealt more with Bob's horses and the organizations he is so passionate about. That's Bob Crockett.

Bob would probably disapprove of the term "unsung hero," but the Crocketts are irreplaceable friends of Assiniboia Downs and horse racing in general. Simply stated, Bob and Marg Crockett are good people! Should your path happen to cross theirs, please flash them a smile.

We can't be sure what the Downs did to deserve the Crocketts, but we're grateful to count them among our friends and we sure wish we had a lot more…