“Doc” Elder reflects on the Captain, the Colonel, a Close Encounter and more… 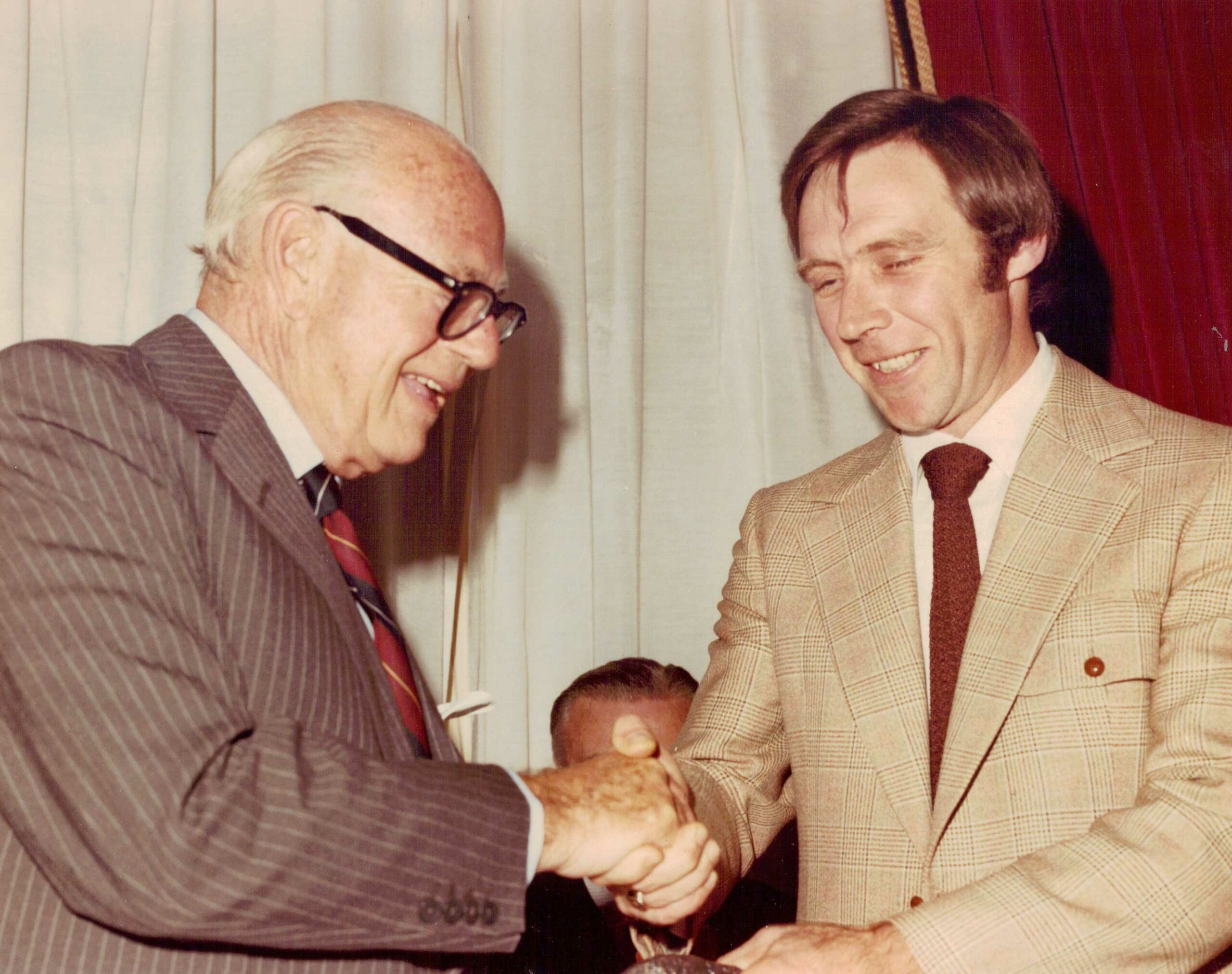 Most of us know Dr. Norm Elder as the one-time owner of Elder's Equine Clinic, or for that matter some might think he still owns the clinic. In addition, he's recognized as a member of the Manitoba Jockey Club (MJC) Board of Directors, but there's so much more to his story.

Elder sold his clinic 10 years ago and retired, and yes, he is one of the founding members of the MJC. He’s been a part of that action since the MJC took ownership of Assiniboia Downs in September 1993, and he remains active in his capacity as Vice-President for the organization.

Meanwhile, back at the clinic, "Retired?" Not really. Does a veterinarian ever retire? Not “Doc” Elder. He has a handful of loyal clients who have relied on him for 50-plus years and it's a group he continues to serve. So he still "dabbles."

Norman John Elder was born in Regina to Cliff and Thelma Elder. He has two siblings, a brother and a sister. Like a lot of people you read about here, he's been around horses all his life. As a boy, he was an accomplished rider.

Who knew? In 1963 a young Norm Elder was a National Junior Hunter Jumper Champion, beating out future Olympian Jim Day.

Elder's life-path intertwined with notable Saskatchewan horseman Captain Stanley Harrison. If you're going to learn something, draw from the best. One can only imagine the influence that "Cap" had when Elder turned to the breeding of thoroughbreds. It was a subject on which Harrison was well versed. 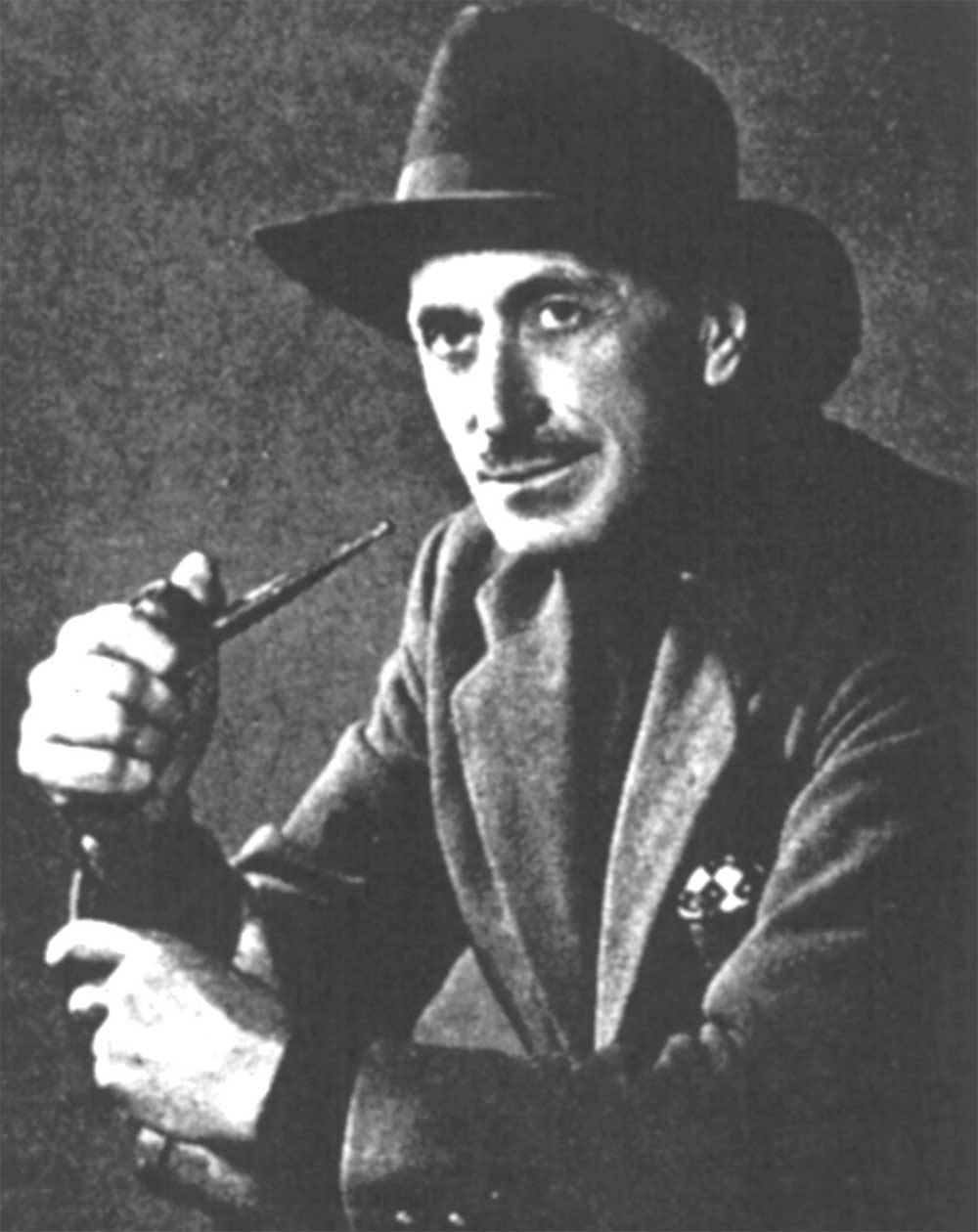 At an early age Elder shaped his interest in horses, learning everything he could before going to veterinarian school down east. He graduated in 1965 from the Ontario Veterinary College at the University of Guelph and we’re told he was the youngest to graduate as a Doctor of Veterinary Medicine at Guelph.

Elder returned to Manitoba after graduating and established Elder's Equine Clinic. In 1966 he was the first Manitoba Horse Racing Commission veterinarian. Previously, the racetrack had hired the vet. The following year he focused his attention on his clinic, while servicing the needs of Assiniboia Downs with an on-track office.

Elder speaks kindly of his friendship with Bert and Eileen Blake. He told stories and we laughed until tears formed in my eyes. However, those anecdotes shall remain within the confidential domain of their friendship. Suffice to say, he was close to the Blakes. Back in the day, Albert Edward "Bert" Blake was known as "Colonel."  Governor Wendell Ford of the Commonwealth of Kentucky granted Blake the commission of " Kentucky Colonel."

He misses his old pal, Bert, who has been gone for a decade now. As far as Elder is concerned, his buddy was one of the last of the true horsemen in these parts. 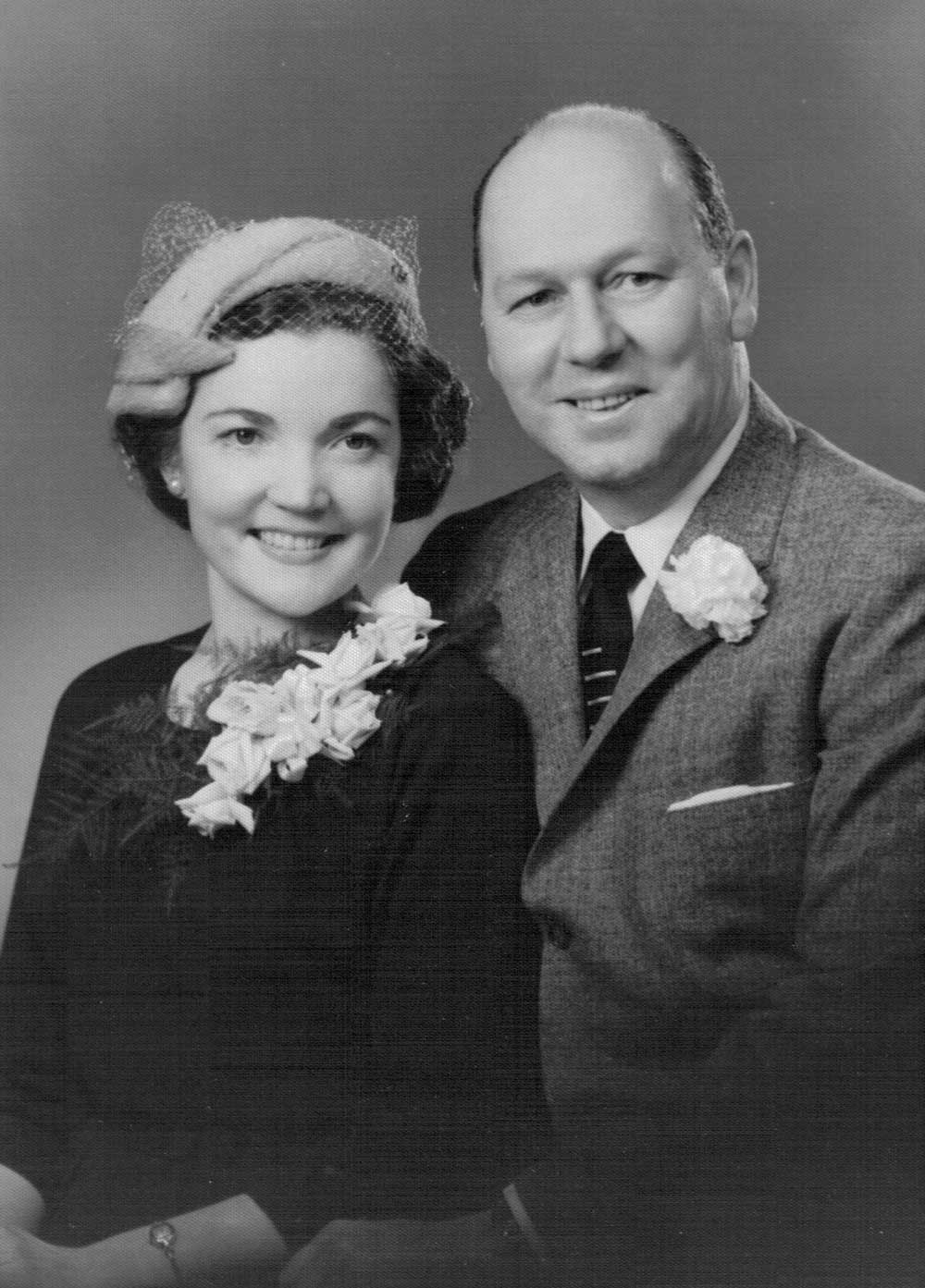 Bert and Eileen Blake.On October 28, 1973, Elder had his close encounter of the equine kind. He was present for Secretariat's final race, the Canadian International Championship at Woodbine. As luck would have it, the Paddock Judge at Woodbine, Dave Sommerville, was an old pal from Assiniboia Downs.

Sommerville told Elder to come down to the paddock prior to the big race and stand by his side and that’s exactly what he did. While they waited for the horses to make their appearance, crowds started to form and noise levels rose. The scene had to be terrifying for some of the horses in the race, but not for the "Great One."  As Secretariat made his way into the walking ring, he was unphased by all the hoopla and looked absolutely magnificent.

Elder described "Big Red" as the ultimate equine. His colour, size, conformation and ability were off the charts. He had no peers. As Secretariat walked by, Elder was awed by the aura that surrounded the "Horse that God Built." It was a close encounter because Secretariat truly was a horse that was out-of-this world. 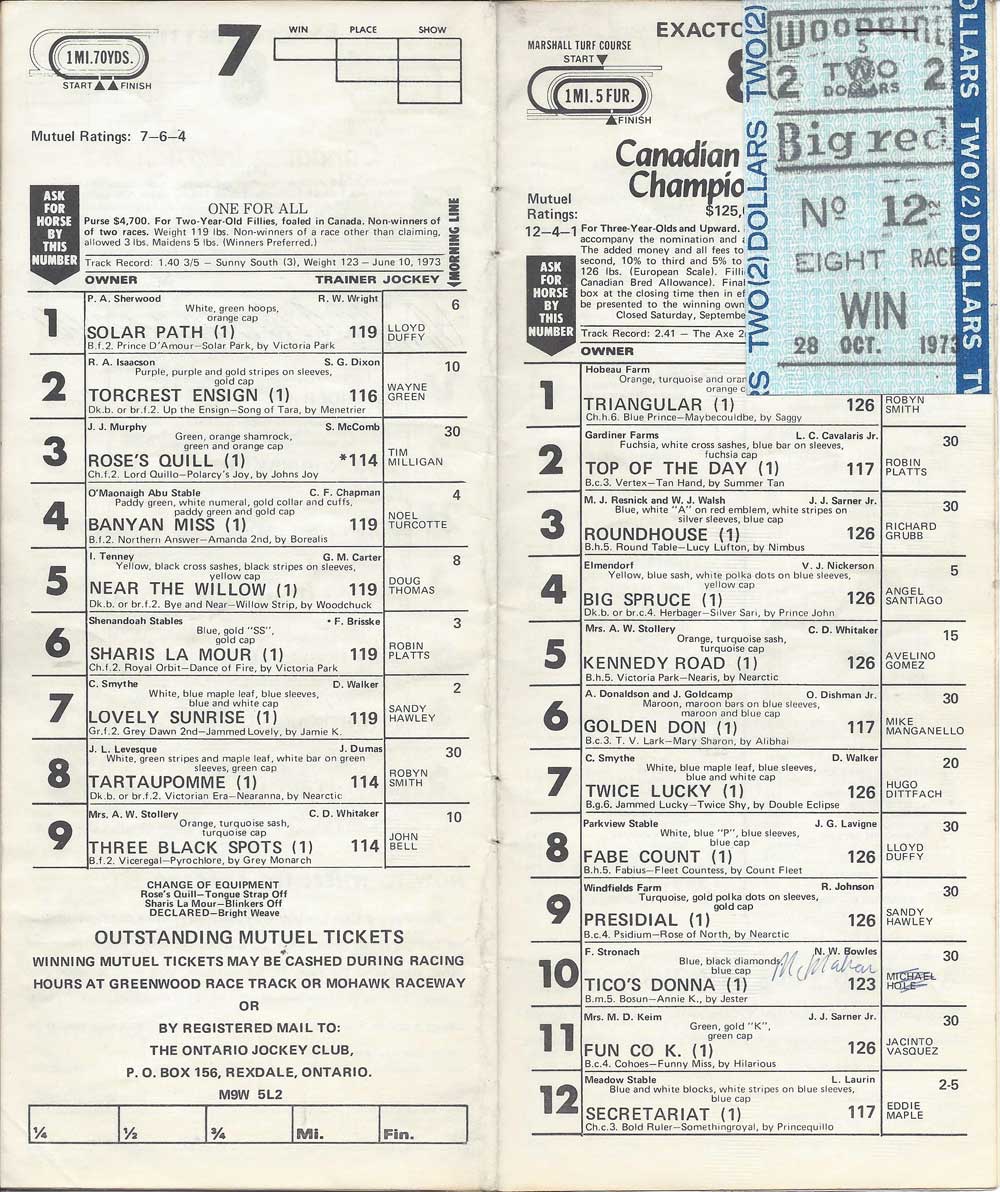 36th running of the Canadian International Championship at Woodbine with a $2 Win Ticket on Secretariat. October 28, 1973.

In the early years, Elder owned and trained thoroughbreds, before turning his attention to breeding. He never struck "gold" in that part of the business, but was proud to say that every horse he bred broke its maiden. He gave it his best effort, but an 85-cent Canadian dollar made the breeding of good thoroughbreds not all that financially feasible. His greatest success would come in his life-long work as an equine veterinarian.

He spoke of the lack of "characters" associated with racing these days. Horse racings' members of the rogues’ gallery are gone. At one time the backside was littered with them, but no more. These days society wouldn't tolerate the nicknames. In keeping with that sensitivity, their names won't be repeated, but veteran racetrackers remember the ones from our backstretch.

Heaven forbid someone be offended. In his book "A Hoofprint on My Heart," Jim Coleman spoke of Stuttering Charlie Smith, Kinky King and High-Ball Kelly. Cap Harrison and Bert Blake would scoff at the sensitivity surrounding the subject. 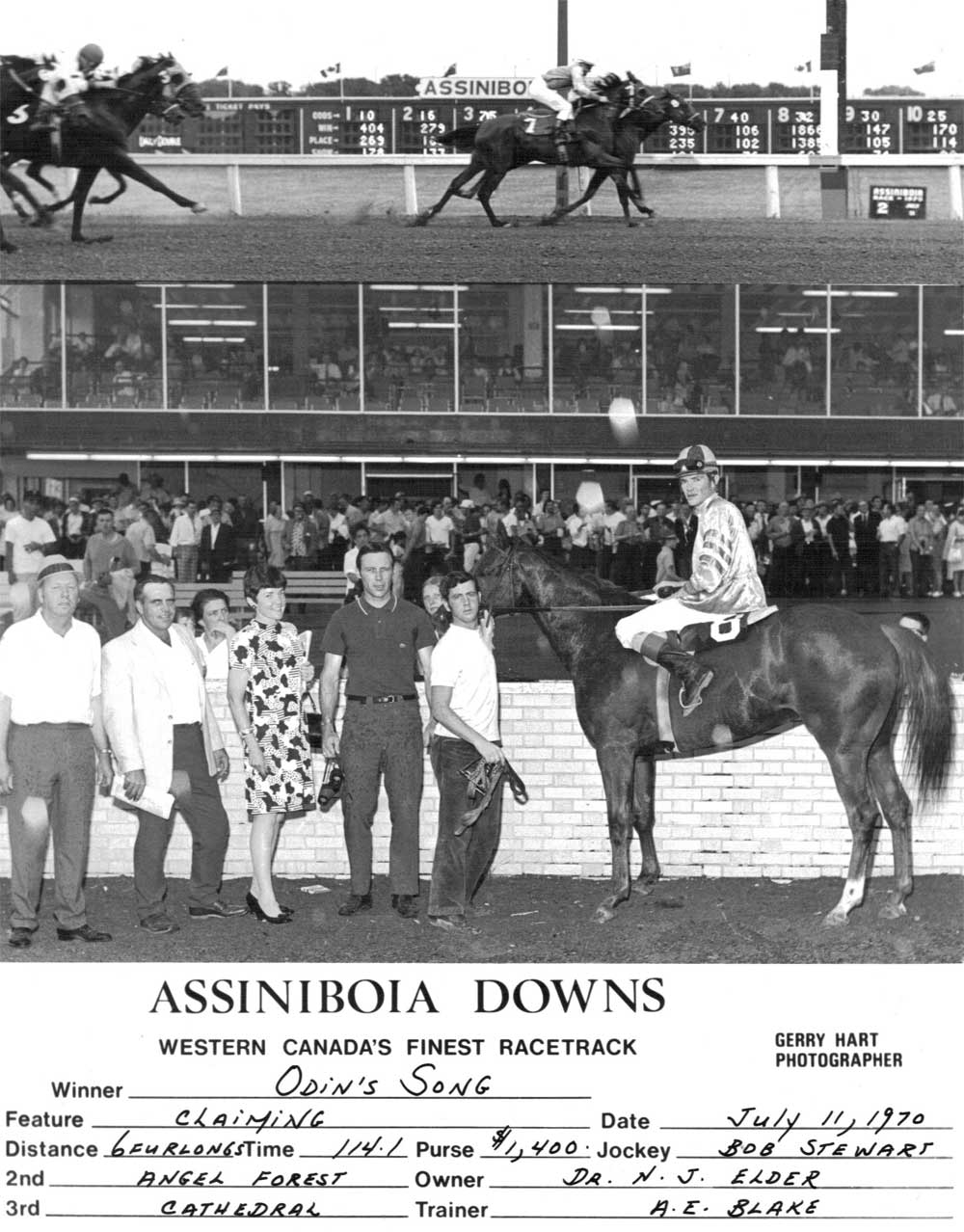 A couple of former employees spoke in unison about their old boss:

"Brilliant veterinarian, good friend and confidant. There's truly no one else like Dr. Norman Elder." - Deb and Marvin Buffalo

"Scrupulously honest. Above all, I could count on him. His dedication to the industry is second to none. I have nothing but respect for the man." - Sue Marzolf

We also turned to fellow MJC board member, breeder and veterinarian, Dr. Ross McKague for his take on Doc Elder:

“Many are given the label dedicated, but few can justify the designation. Dr. Norman Elder has dedicated his entire professional life to the health and welfare of the equine species.

He was for many years the only veterinarian in Manitoba who made his living exclusively from horses… I would consider him the go to person for lameness diagnostics in the horse."

Who Knew? Elder bred and trained Labrador Retrievers for years. In 2021, he said goodbye to his last Black Lab, Lucy. 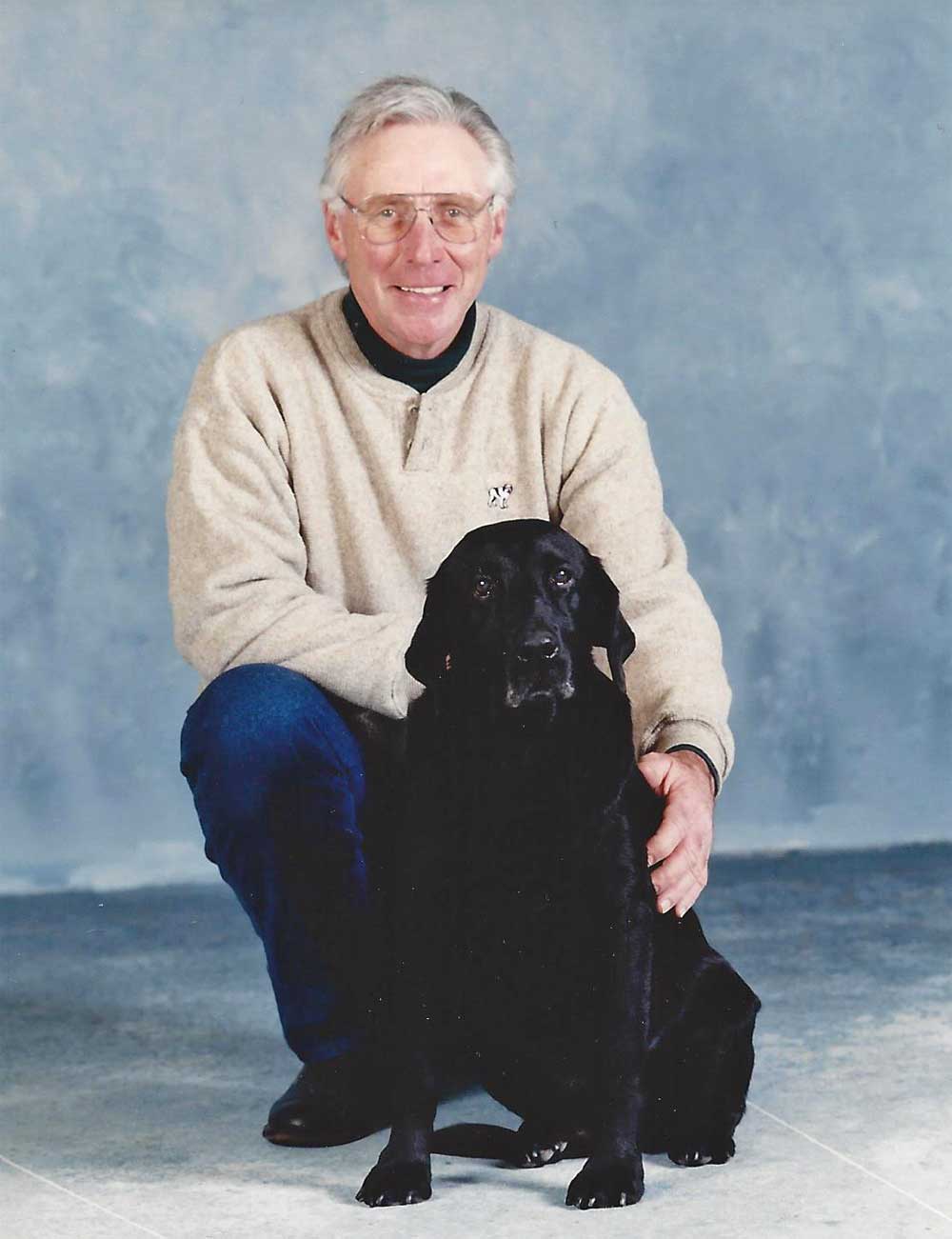 Dr. Norm Elder. A Man and His Dog.

Owner, trainer, accomplished rider, breeder and veterinarian. How fortunate are we to have someone in our own backyard with his experience and skill set? Over the years, there have been countless stories of thoroughbreds who were privileged enough to have had Dr. Norm Elder care for them. If only the hundreds, or is it thousands of equines, who have benefited from his gift could talk.

Dr. Norm Elder is well-respected in his field. Many veteran horsepeople have looked to him for going-on 60 years. He has dedicated most of his life to the welfare of the horse. He is entitled to our never-ending gratitude for his efforts.

The good doctor has a birthday coming-up this Halloween. No tricks please, only treats. It's difficult to comprehend the magnitude of his contributions to equine medicine and horse racing in general. Thanks Doc, you are one-of-a-kind and we are eternally grateful for your influence and service…

To the horses, and to the sport we all love!