Light Dust: Champion of the Prairie Racing Circuit and Proudly a Manitoba-Bred Last winter, during a covid-induced research binge, the name Light Dust jumped off the pages of the defunct Winnipeg Tribune. The headline read, "That's all for Light Dust."

This old-time runner's name was a familiar one. He was a rare breed, a champion from the old Prairie Racing Circuit who had also raced at Assiniboia Downs when our track was in its infancy. If we're going to be honest, his time at the Downs came when he was in the twilight of his career.

Fact is, he probably should have been retired. Lord knows he earned it! Why so, you wonder? Light Dust's life would be the envy of most thoroughbreds. He was owned by Meadowbrook Stables. In the early days, Meadowbrook was comprised of his breeder, Frank Kilroy and partner, Max Freed. The stables' trainer was Bob "Boo Boo" Watt, who had conditioned some of the finest horses in Western Canada. His charges included Fort Garry, Victory Gift, Free as Air and Dandy Thought, but the best of them was Light Dust.

The dark bay was one of those horses who got better as he aged. His 2-year-old season was almost non-existent. He had but one start and finished up-the-track in 1952.

However, 1953 saw him mature and give signs he was going to be a force on the racetrack. Going into the premier race of the season for 3-year-olds, the Canadian Derby, Light Dust sported a record of four wins, three seconds and two thirds in his nine starts. A second-place finish in the Derby Trial and a third in the Alberta Derby were his ticket to Canada's Derby.

The Canadian Derby proved tough, however. The heavy track and the 126 pounds he (like others) had to carry was just a tad more than the front-running gelding could handle. The much-favoured eastern invader, Chain Reaction, caught Light Dust at the top of the stretch and blew by to win by seven lengths.  The promising 3-year-old finished well and held on for the runner-up position.

The Meadowbrook runner's glory years would follow as he took on the best the prairies had from 1954 to 1957. The highlight that demonstrates Light Dust's dominance over his competition was his three-peat in the west's premier stakes race for older horses, the Western Canada Handicap. Light Dust remains the only three-time winner of that race, having won it in 1954, ‘56 and ‘57.  In 1955 he finished a credible third.

His wins in the Western Canada Handicap were hard-fought. 1956 saw him spot his foes anywhere from four to 17 pounds and in 1957 he gave away 10 to 17 pounds.

The beginning of the 1956 campaign saw a change in the stable name, from Meadowbrook to Max Freed's Maxwell King Stables. Polo Park's feature race on June 27, 1956, was the Harry James Handicap. To add some star power to the post race ceremony, “Big Band" leader James was on hand to make the presentation to the race winner, Max Freed's Light Dust. 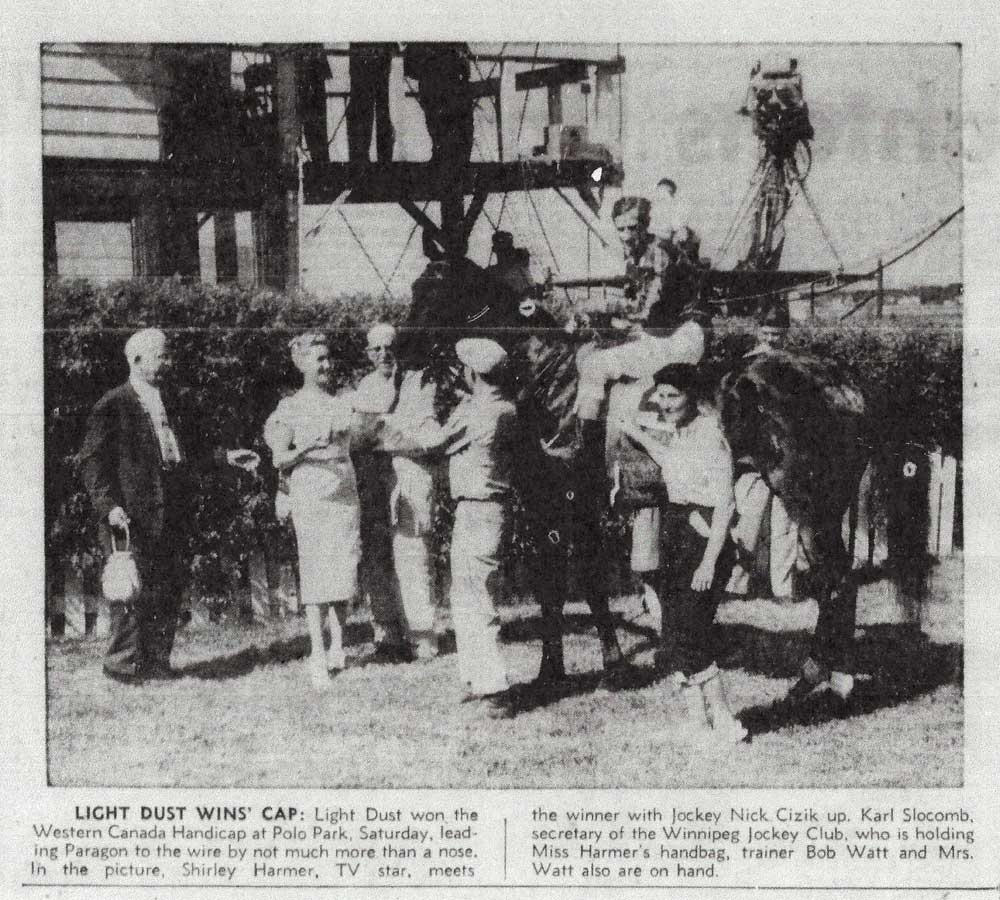 With the closure of Polo Park in 1956, there was no racing in Winnipeg until Assiniboia Downs opened in 1958. That mattered little to Light Dust however, as he continued his winning ways for the Maxwell King Stables. While racing out west in 1957 he registered seven victories in 10 appearances.

The 1958 opening of the Downs saw the return of Light Dust to Winnipeg.  Owner Max Freed recorded his first win at Assiniboia Downs on September 1, 1958, thanks to Light Dust, but age was starting to take its toll on the veteran runner. For the first time, he was relegated to the claiming ranks. Sure, he still posted victories, only now he ran for a claiming price that ranged anywhere from of $1,750 to $3,500. In time, rock-bottom $1,000 claiming races would follow.

At the end of the 1959 season, Freed's trainer Bob Watt ran a foul of the Prairie Thoroughbred Breeding and Racing Association and was handed a 60-day suspension. Watt served the time and was eventually reinstated. Freed however, was embarrassed by the publicity the case received, and withdrew from the Winnipeg racing scene in 1960 and 1961. After a two-year absence, Freed's green and gold silks returned to the Downs in 1962.

The dark bay gelding by Fairmond out of Dusty Polly by Brooms was back racing at the Downs again, sporting a record of 36 wins, 27 seconds and 28 thirds from 124 starts, with career earnings of $61,896. In today's dollars those earnings would be worth considerably more.

Thing is, the gallant gelding's competitive spirit was writing cheques that his 12-year-old legs could no longer cash. The final win of Light Dust's career came on July 2, 1962. Prior to the horses going to post for this race, Freed commented "He's old, but he's honest." It was reported that Bob Watt ran the last half of the stretch drive along side of the dark bay urging him on to victory. Come 1963, Light Dust just didn't have it any more. The Winnipeg Free Press Graded Selection comments started to sound like tributes, "Not the horse he used to be" and " A great horse in his day."  In the end, they foreshadowed his oncoming forced retirement.

The aging gelding suffered a common fate that afflicts others of his brethren. A gelding has no residual value and he was no longer competitive, not even in lower-level claiming races. Lastly, the fact that he was turning 14, the then mandatory age of retirement, meant Light Dust was done.

At the end of the 1963 season Freed was informed that Light Dust would be refused stall space at future Downs race meets. As the only three-time winner of the Western Canada Handicap, Light Dust did nothing to deserve the indignity of being told "there was no room for him at the inn."  You had to feel for the once premier runner from the old Prairie Circuit.

We've come full circle. The October 1963 Downs announcement spelled the end of the road for the old boy. There is no ending to Light Dust's story, his ultimate fate is unknown. His name merely disappeared from the sports' pages. Did anyone care?

Likely, he was retired to Freed's farm, where he lived-out his remaining years.  Yes, that's it, let's go with a dignified death and burial at the only home he ever knew at 2295 Henderson Highway.

Light Dust has long-since passed and you just know that he was there to greet Bob Watt when he died in 1999. Envision if you will, Light Dust and "Boo Boo" standing by the rail in the great beyond, biding their time awaiting the arrival of Max Freed, who left us in 2010.

The Meadow of Eternal Youth.