Ron Turcotte was 14 when he left school to work as a lumberjack with his father.  He saw his career go from cutting lumber in the bush to construction work and eventually he found his way to E. P. Taylor's Windfields Farm in 1960.

In those early years his racing experiences including mucking stalls, walking hots, and rubbing horses. It wasn't long before he was breaking yearlings, galloping and working the majestic beasts he admired.

In time, he found his way to the jocks' room as an apprentice. His first win came in 1962 at Fort Erie aboard Pheasant Lane. By the end of the season, he was the leading rider in Canada. Talk about a great start!

How about a little background, to put things in an Assiniboia Downs perspective?

It was a chance Facebook meeting in March 2020 that would turn into the greatest horse racing moment any self-proclaimed track historian could dream about. A search for photos from the 1970 Manitoba Centennial Derby led me to Ron's Facebook page. The 1970 Derby, you may recall, was won by John-Louis Levesque's Fanfreluche, and she was ridden by Ron Turcotte.

Turns out Ron wasn't much help. His photos from the July 15, 1970, Derby went missing in 1978 when he moved back to New Brunswick. As luck would have it, I had a few that I could send him, but my offering was meagre. So the hunt was on for a better selection of photographs of the day Her Majesty Queen Elizabeth II visited Assiniboia Downs.

We stayed in contact and in the summer of 2021 an extended member of Jack Hardy's family surfaced with Hardy's personal photo album of the 1970 Centennial Derby. The album had been put together professionally for the founder of the Downs and had every picture you could possibly want to mark the occasion.

Last December, I made copies of the best photos and sent them to Ron. Suffice it to say, Turcotte was thrilled and our friendship blossomed. A couple of weeks ago Ron and I talked about his memories of the Downs.

Needless to say, you don't speak with the man who rode the greatest horse ever without talking about Secretariat. Ron spoke of "Red," Northern Dancer and his experiences at Assiniboia Downs. First up was Secretariat. There was no doubt in Ron's mind, that Red was the best ever! No one else came close. Turcotte mused that if the big guy had a weakness, he never saw it. The only Triple Crown race where he used his crop was the Kentucky Derby and it wasn't to ask for speed, he just wanted Red to change leads. Other than that, his stick never came into play for the Preakness or Belmont.

Ron explained that we never saw the true Secretariat. At three he was a baby and he wouldn't have peaked as a runner until he was five. You have to wonder; how much better could he have been?

Following Secretariat's death in 1989, Ron said his phone didn't stop ringing. "It was like losing a part of my family." Of Northern Dancer, Turcotte indicated that, "Next to Secretariat, Dancer was the greatest horse I ever rode."  The Dancer had nine starts as a 2-year-old with Ron riding him five times. He was aboard the colt for his first race on August 2, 1963, when he broke his maiden. On September 7, 1970, Ron had the honour of parading the Dancer before the crowd at Woodbine, when the retired colt made a ceremonial final appearance in Canada.

Not that the above information wasn't a thrill to discuss, but let's get to Ron's visits to Assiniboia Downs. On June 18, 1963, he was in town to help celebrate "Tommy Stadnyk Day."  Winnipeg born Stadnyk, who had ridden more winners at the Downs than any other rider at the time, 212, was presented with a variety of gifts and mementos. The winner of the race to mark the occasion, the Tommy Stadnyk Purse?  None other than Ron Turcotte, who was aboard JY Stable's (Jack Hardy) Bala Roman. 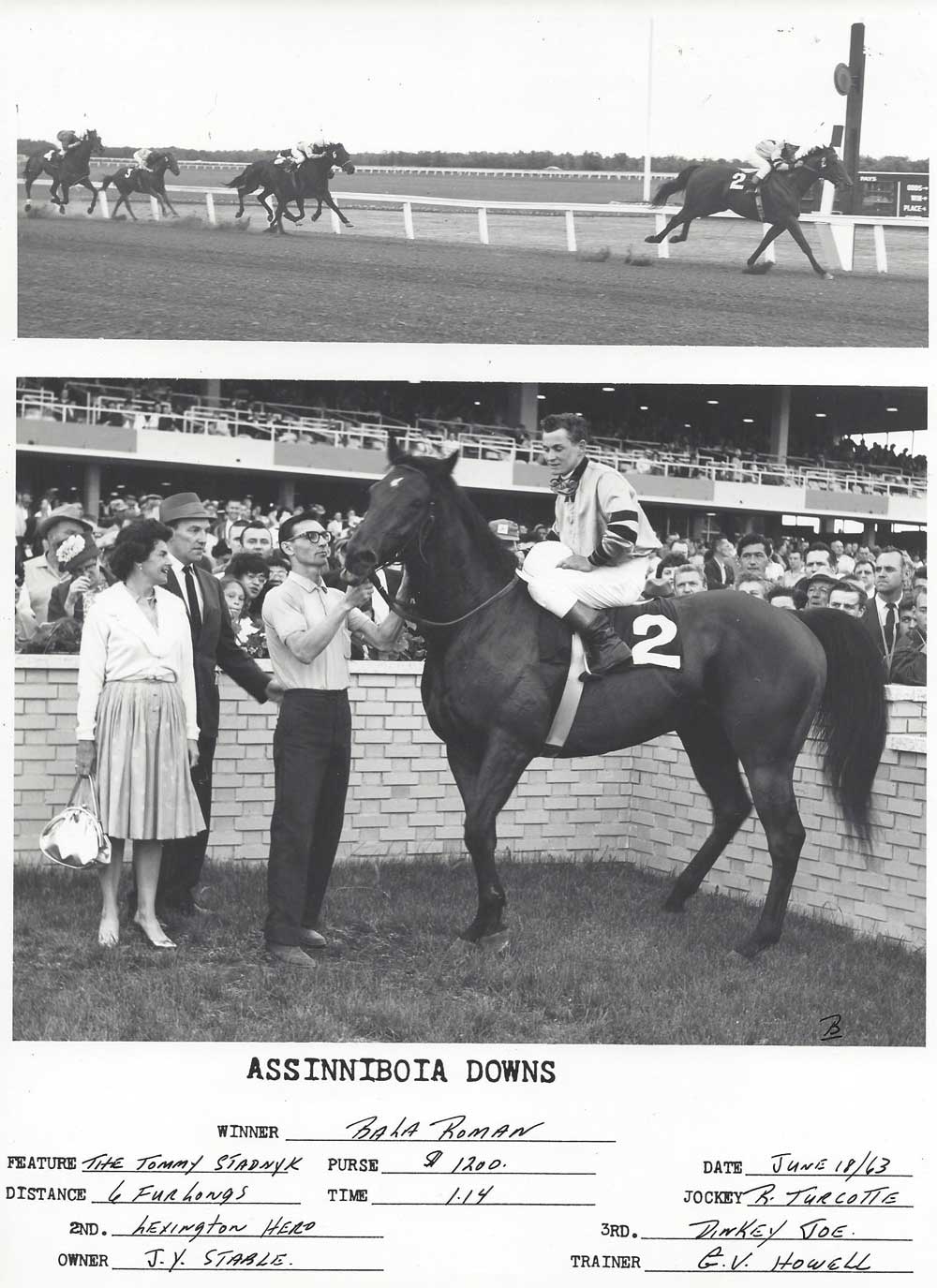 Ron's main memory of that day was Sally Merrill's (wife of top trainer Frank Merrill Jr.) win in the Powder Puff Derby. He and Sally had flown to Winnipeg together for Tommy Stadnyk Day and the fourth running of the Downs' Powder Puff Derby.

Ron rode the race favourite, Jean-Louis Levesque's fine filly Fanfreluche, who didn't disappoint. The racing oval was a heavy, gnarly track which Turcotte said Fanfreluche, the only filly in the race, handled well. He acknowledged however, that the race left her tired.

Turcotte said he loved to ride for Mr. Levesque. Another Fanfreluche memory was her narrow loss to Almoner in the Queen's Plate in June 1970. Ron accepted responsibility for her Plate loss and was certain she should have won the race.

Who knew? Ron Turcotte never won the Queen's Plate and his 1970 appearance aboard the Levesque filly was his best finish.

The highlight of his Downs 1970 visit, other than winning the race of course, was meeting Queen Elizabeth II. The two struck a quick bond when she brought up the filly's sire, Northern Dancer. She was familiar and impressed with his prominence as a sire.

In 1973, Ron was back at the Downs for the 44th Running of the Winnipeg Futurity. His mount, Backstretch, ran as an entry with Lumber Dealer and were second favourites on the board. There were no happy ending however, as Turcotte's horse ran fifth, while Lumber Dealer finished third.

Turcotte could not recall the race, he thought he'd won the Futurity twice. Hey, after more than 20,000 starts, 3,000 wins and $28 million in earnings, he can be forgiven for not remembering a race he lost almost 50 years ago. Not to mention this race took place only a few short weeks after his success in the Triple Crown.

Ron’s final appearance at the Downs came in the 48th Running of the Futurity in 1977. He was in a familiar spot, aboard another fine horse owned by Jean-Louis Levesque. This time it was L'Alezane, a daughter of the mighty Dr. Fager, out of Northern Willow by Northern Dancer. At the time. L'Alezane was considered the best 2-year-old filly in Canada and by some, the best in North America.

The less-than-even-money favourite handled the off-track with ease and bested runner-up Tikvah with Avelino Gomez in the saddle. In a post race interview, Gomez acknowledged that he got beat by the best.

You couldn't help but be in awe of Ronald Joseph Morel "Ronnie" Turcotte. In 1973 he rode the greatest horse of all-time to become the first Triple Crown winner since Citation in 1948. It had been a long wait; 25 years, and we wondered if it would ever happen again.

Most know that Ron’s career came to an end as a result of a spill on July 13, 1978. The accident ended Ron's career, but it never defined who he was. Let's close with a racing oddity. Secretariat's race record stands at 16 wins, 3 seconds, a third and a fourth-place finish from 21 starts. Last week's blog story explained that our own Balooga Bull raced 21 times at the Downs, and NOT to compare horses, only records, Bull's matches the great one, 16 wins, 3 seconds, a third and even the fourth-place finish.

My endearing thanks to Ron Turcotte for giving this track historian…

The greatest racing thrill ever!