Remembering Dick Armstrong and His Family’s Home Away From Home Let's celebrate a Diamond Jubilee, shall we?

This year marks the 60th anniversary of jockey George Richard "Dickie" Armstrong's first leading-rider title (1962) at Assiniboia Downs. The Maple Creek, Saskatchewan native would go on to top the Downs leaderboard three more times (1964, 1965 and 1967) during his career in Winnipeg. Dick won 478 races during the 11 years (1958 to 1969) he raced at the Downs. Only Bobby Stewart would earn more leading rider titles (six). Fact is, Dick Armstrong was a damn fine jockey and yet he was a better man than he was a rider of thoroughbreds. His career highlights at the Downs include:

If you're like me and have been around for a bit, you will probably remember some of the above events, but here's a couple of goodies you might have missed. Let's file these under the heading of "Who knew?" In the early 1960s, Dick usually headed east once the Downs meet had concluded. Two of his better efforts included the 1962 Coronation Futurity and the 1963 Cup and Saucer Stakes.

In the Futurity he rode Max Bell's Welcome Pardner to an upset victory, returning a handsome $104.40 for a $2 win ticket. In the Cup and Saucer the following year he accomplished a rare feat. Dick and his mount Grand Garcon handed a budding 2-year-old Northern Dancer one of only four career losses. Grand Garcon also paid a tidy sum, $91.50 for the win. A true highlight when you consider the mighty "Dancer" won 14 races, placed second four times and third four times, in 18 career starts.

Dick retired following a serious on-track accident at Woodbine in 1971.  Rather than risk further injury, he decided it would be wise to hang up his tack.

Dick returned to the Downs in 2008 for our 50th anniversary celebrations. His contributions to the festivities were summed up by Downs' CEO Darren Dunn as follows:

“Dick Armstrong was such a gentlemen to engage with on this special anniversary event. He was polite, gracious and full of positivity, while at the same time so grateful to be involved with our event and give support back to Assiniboia Downs and the industry that provided him with so many opportunities in life.” 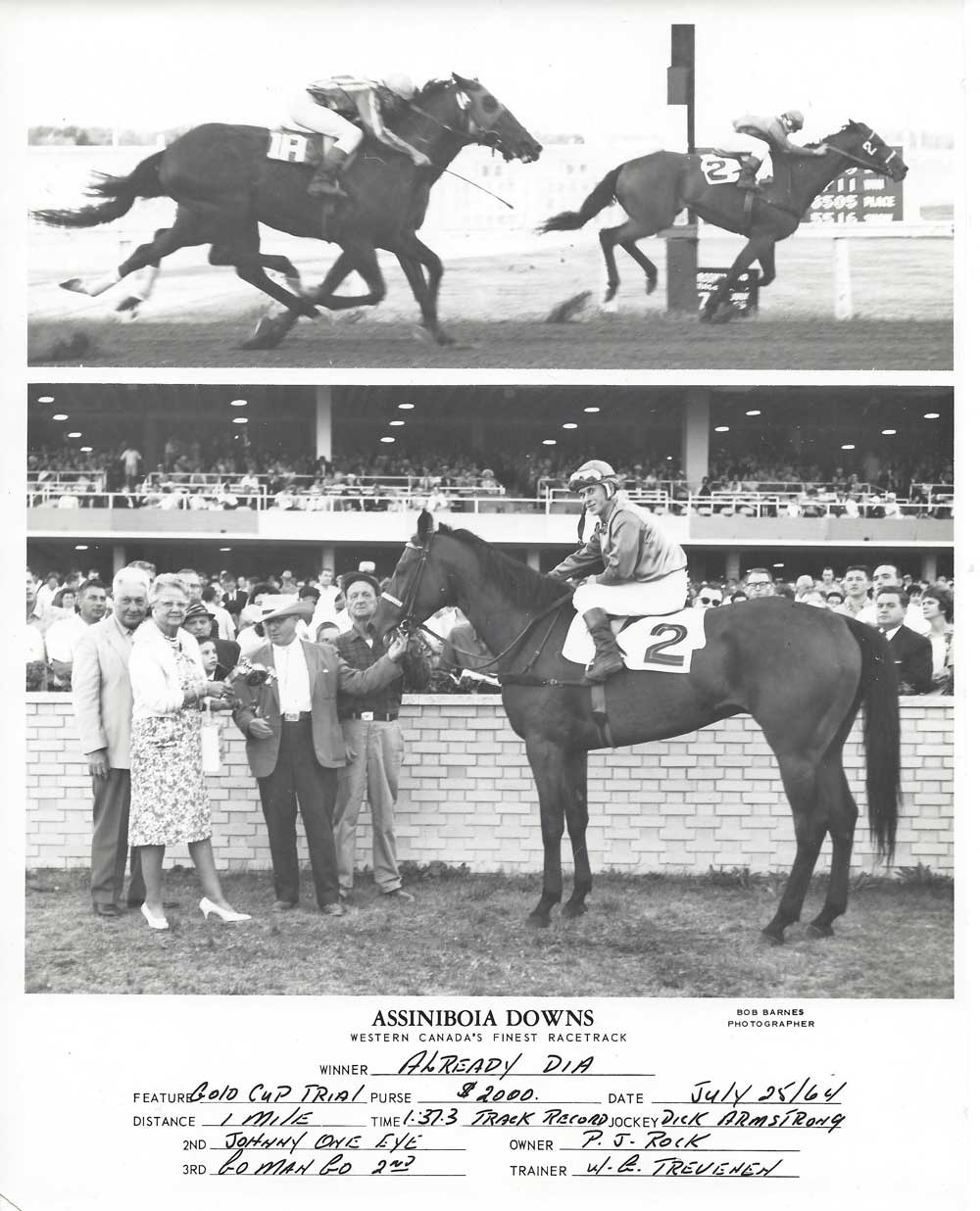 Last November, thanks to social media, I was fortunate enough to connect with Dick's wife Gloria Hill Armstrong. I call her Mrs. A.

We communicate regularly and I can tell you she is a delightful person who is generous beyond belief. She was kind enough to "gift" me several of Dick's racing photos. Mrs. A is a private person and I want to respect her wishes to remain so. However, I feel comfortable telling you about how she remembers her time here at the Downs.

When discussing Assiniboia Downs, people in the industry have repeatedly said horse-people want to race here and brag that they are treated better at the Downs than anywhere else they have ever raced. On June 25, 1969 Dick Armstrong rode four winners for the same owner and trainer, by the same sire.

Mrs. A's message is clear and very much echoed the above statement. She considers Winnipeg and the Downs her second home. She loved it here and couldn’t wait to come back every summer. She explained that looking through Dick's old photos brought back wonderful memories of people she hadn’t thought of in years. People like Lil and Harry Jeffrey, Hugo Dittfach, and "Mister" Bob Franklin, to name but a few.

Mrs. A, along with her son Darryn, love it when people say they remember her late husband for always being so respectful and calling everybody "Sir" or "Ma'am."

She is proud that the sport was such a big part of their lives for so many years and explained "Times were so different then. Racetrackers were a whole different breed. We truly were an extended family… Assiniboia Downs will always be my favourite racetrack. The track itself, the City, all the riders, owners, and fans. They were an important part of our life."

Mrs. A's words struck a chord with me. Her comfort level with the Downs and our fair City affected her deeply, perhaps more than she realized.

And as is so often the case, a song came to mind…

All the best to you, Mrs. A, and your son, Darryn…

On this, the Diamond Jubilee of Dick's first leading-rider title at Assiniboia Downs!