On March 27, 2021 Todd Kenneth Kabel was more than a thousand miles away from his home track, Assiniboia Downs, when the "Big Boss of the Riders" gave him the "Riders Up" call for the final time. He was 55.

This week we celebrate the brilliance of the young man who hailed from McCreary Manitoba. Sure, major wins, including two Queen's Plates, and awards galore would follow during the time Todd competed at Ontario tracks, but what about the formative part of his career? You know, the time he spent right here at the 6 ½-furlong Portage Avenue oval we call the Downs.

By now most of us know that Todd Kabel was discovered by Emile Corbel and spent a couple of years riding Corbel's quarter-horses at rural fairs in Saskatchewan and Manitoba. Todd moved to Winnipeg in time for spring training in 1984 and hooked-up with Clifford "Shorty" Gray. He was a force to be reckoned with from his first race here in 1984 through to his final season of riding locally in 1989.

During his time at the Downs, Todd had a soft spot for horses Michigan Avenue, Forli's Ainikel and 1989 Manitoba Derby winner, Rough Catch. Career Wins at ASD by Year:

First Start: June 5, 1984 is the date listed by Equibase for Todd’s first-ever mount. The horse was Doctor Salem. The Winnipeg Free Press, however, listed Todd as the rider for Roulette Hustler that ran one week earlier on May 5th. Not that it mattered, as Roulette Hustler (40-1) finished 8th in a 9-horse field and Doctor Salem (23-1) ran 7th in a 10-horse field.

Award: In 1986 won the Sovereign Award as the Outstanding Apprentice Jockey in Canada.

When the Downs' 1987 season was over, Todd made his way to Toronto to finish off the racing year. He started the 1988 season in Toronto, but it was a tough go.  Todd licked his wounds and returned to the Downs for the 1988 summer meeting. At seasons’ end he travelled east one more time to continue his efforts to become one of the top riders in the east.

The 1989 season would be Todd's last at the Downs, but he had something to prove.  A young and hungry Brian Bochinski had wrestled the jockey title away from Kabel in 1988 and Todd wanted it back. Although he started the season out east, he came home to Winnipeg for the Downs 1989 meeting. The 1989 season became a battle in which the trainer/rider combo of Shorty Gray and Todd Kabel took on the team of Tommy Dodds and Brian Bochinski. It was a great year for Todd. He won almost everything in sight, including the Manitoba Derby on Rough Catch. He racked up 155 wins and finished nine wins ahead of runner-up Frank Licata. Come November and December Todd went east again. The Downs had pretty much seen the last of the McCreary native.

In early 1990 Todd decided, he would compete at the money tracks of southern Ontario. No one could deny his talent and few who knew him were surprised at his success. In May Todd lost his Manitoba Derby partner, Rough Catch, to a twisted bowel. We'll never know how much the loss of the Derby winner affected him. Even after winning the Queen's Plate in 1995, Todd still said his biggest thrill in racing was winning the 1989 Manitoba Derby aboard Rough Catch!

Todd returned to the Downs a handful of times in the years that followed, but the call of the big-league tracks in Toronto won out over his humble beginnings at Assiniboia Downs. His last win at the Downs came on July 9, 1990 when he rode Feudal for Jerry Lambert. Not everyone knows this, but Jerry and wife Wanda are the Godparents of Todd's eldest daughter Ashley. Todd’s last race at the Downs was Derby Day, August 2, 1993. His mount, Coreys Gray, finished fifth.

In 1995 and 2004 Kabel was honoured at the Manitoba Sportswriters and Sportscasters Association awards dinner as Manitoba's Male Athlete of the Year. 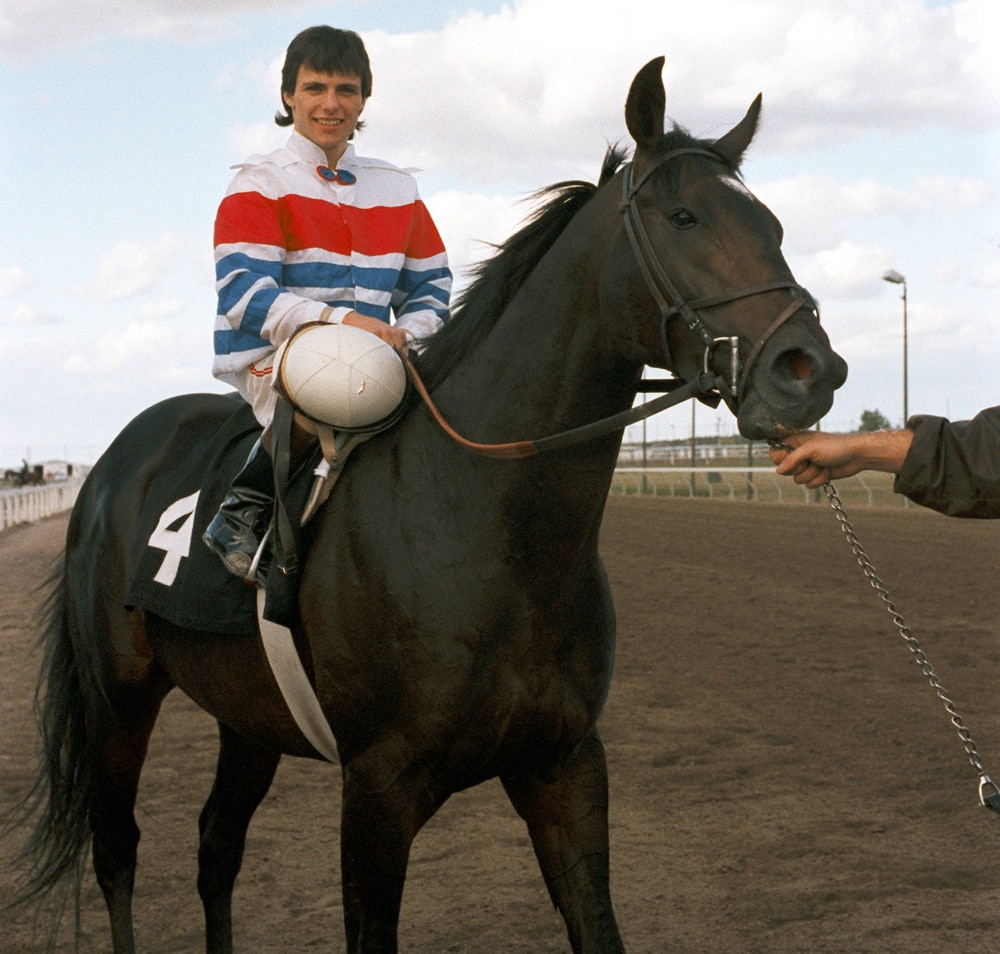 Todd Kabel after winning the 1986 Winnipeg Futurity aboard Canadian Fighter.

Todd Kenneth Kabel was a multiple graded stakes-winning jockey. The scary part is he had talent that he hadn't even tapped. Man could he ride, but he was so much more. He was a son, brother, uncle, father and grandfather. Todd will forever remain in the hearts of his children, Ashley, Brittany, Tyler and Justin.

When asked what she wanted people to remember about her Dad, Ashley replied "He was my Dad!  He was a good person, who enjoyed life."

It is comforting to know that Todd is now at peace, and that his spirit has returned home to the site of his early triumphs and precious memories…

"Life should not be a journey to the grave with the intention of arriving safely in a pretty and well-preserved body, but rather to skid in broadside in a cloud of smoke, thoroughly used up, totally worn out, and loudly proclaiming Wow! What a ride!" -- Hunter S. Thompson