On Monday, August 5, 2019, the Queen's Cup trophy will make her way to the Assiniboia Downs winner's circle to be presented to the Derby champion.  Don’t worry she knows the way, it's a trip she's made many times, but this one's special. This is the 50th!

The 1970 Derby was run on Manitoba's 100th birthday and was known as The Manitoba Centennial Derby. The trophy was donated by Her Majesty Queen Elizabeth ll and was presented for the first time on July 15, 1970. This was quite the occasion and marked the first time a reigning monarch attended the races in Canada anywhere other than Woodbine racetrack.

One can only imagine the hours, days and weeks of work that went into making this historic event happen. I'm sure Jack Hardy and his staff put their feet up for a while once this once-in-a-lifetime extravaganza was done. What a celebration it was, and inviting the English Monarch was brilliant. Her Majesty was perfect for the part. She had her own racing stable and was considered an authority on thoroughbred bloodlines and breeding in Britain.

A special dais was erected near the winner's circle which at that time was located north of the finish line. Along with Her Majesty, the royal visit included the Duke of Edinburgh, the Prince of Wales and Princess Anne. Princes Edward and Andrew were left at home with the nanny.

The royal visit to the Downs lasted all of one hour. The Queen arrived by train along Saskatchewan Avenue, took a leisurely carriage ride around the muddy racing strip, watched the race, presented her Cup and poof, she was gone.

The race attracted a record field of 14 and carried a $70,000 Guaranteed Purse, making it the richest race in western Canada. There was a record Derby crowd of 11,127 on hand to watch Her Majesty present her trophy, the Queen's Cup, for the first time to Fanfreluche and her winning connections, owner J. L. Levesque, trainer J. Starr and jockey Ron Turcotte.

Previous to the Queen donating her trophy, silver trays were the norm. In the early days of the Manitoba Derby, the ones held before Assiniboia Downs was built, a Derby Cup was presented until the race was renamed the Canadian Derby in 1941. This cup was then used to recognize the winner of the Canadian Derby in Winnipeg from 1941 to 1956. The trophy mysteriously disappeared when the Canadian Derby was relocated to Edmonton in 1957 and remains MIA.

The Queen's Cup has witnessed many memorable events since 1970 and this is what we'll call our Queen's Cup highlight reel:

In 1973 the Manitoba Derby purse reached a record $100,000 Guaranteed, making it the second richest horse race in Canada, behind only the Queen's Plate. The 1973 Derby was responsible for the Queen's Plate increasing its purse from $50,000 (Added) to $75,000 (Added). From 1959 to 1972 the Plate had been a $50,000 (Added) event, but in order to continue calling itself Canada's richest thoroughbred horse race the purse had to be increased. 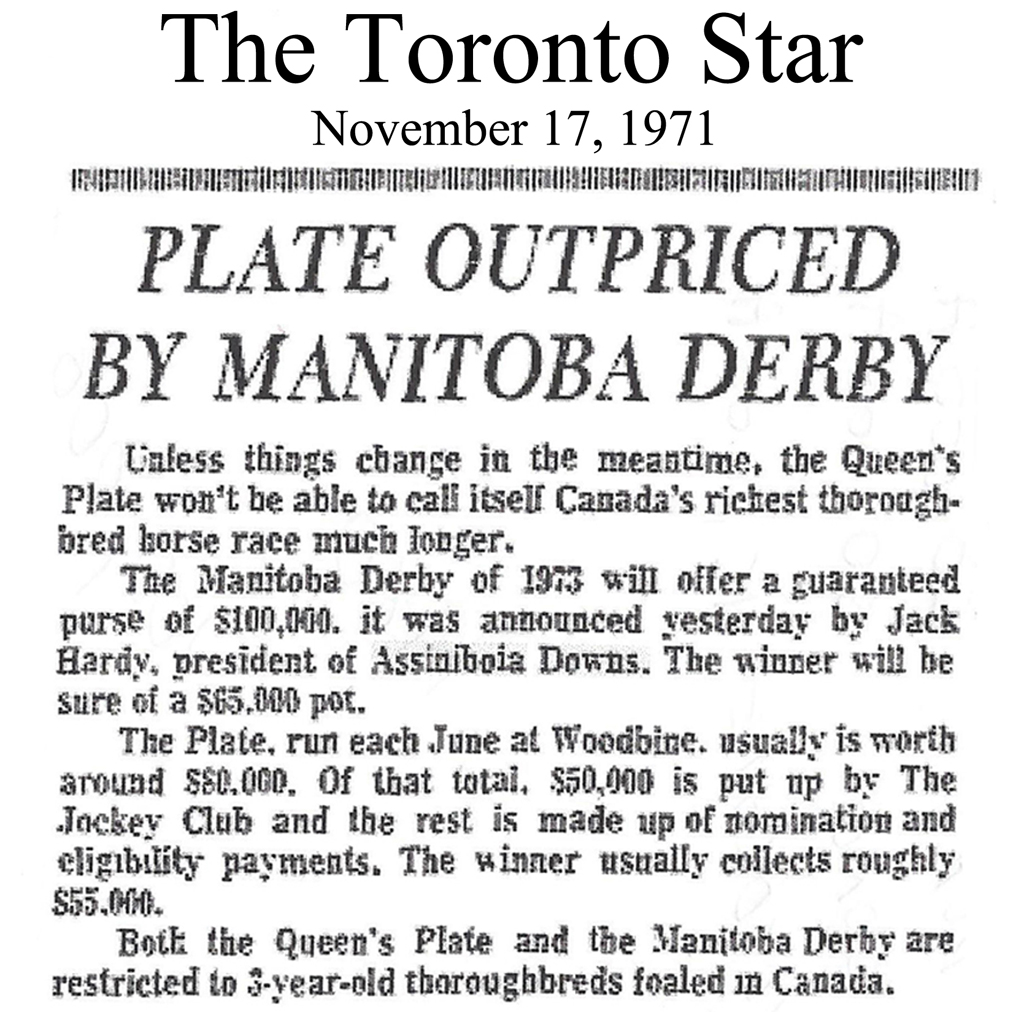 The Manitoba Derby was at one time Canada's richest race.

You would think that winning the Queen's Plate would pretty much guarantee a victory in the Manitoba Derby, but you'd be wrong. Jack Stafford had two Queen's Plate winners, Royal Chocolate and Amber Herod, who both came away empty handed after trying their hand at Manitoba's Derby in 1973 and 1974.

In 1975 Jean Louis Levesque travelled west again, this time with L'Enjoleur.  Levesque had won the 1970 Manitoba Centennial Derby with Fanfreluche. Did I mention that L'Enjoleur was the son of that fabulous filly? L'Enjoleur had things his own way in the Queen's Plate that year and he and jockey Sandy Hawley were heavily favoured to walk away with all the marbles in Manitoba's Derby.  The 1-to-20 favourite, he paid $2.10 to win, making him the shortest priced winner in Manitoba Derby history.

By now most know that in 1976 Merry's Jay became the first Manitoba bred to win the Manitoba Derby since it was held at the Downs. At that time the only other local bred to have won the Derby was Gowerlace, who won in 1938 when it was held at Polo Park racetrack.

Who knew? In order to win the 1976 Derby, Merry's Jay had to beat a son, three grandsons and a granddaughter of 1964 Kentucky Derby and Preakness Stakes winner, Northern Dancer. In a more obscure piece of Derby trivia, the 1976 Derby used a musical theme, much like other Derbies. The song? Red River Valley.

Stafford Farm's Overskate laid an effortless beating on five foes "brave" enough to take him on in the 1978 Derby. The tiny chestnut colt won by 13 lengths under a hand ride and set a new track record for the 1 1/8-mile classic. A record that still stands today. The field was so out of their league that day they should have invoked a mercy rule. The result of the 1988 edition of the Manitoba Derby was predictable and local hopeful Sonshire gave it his best shot but came up a tad short. The story wasn't so much that he was outclassed or that he had a bad trip, but rather the masterful ride that Julie Krone gave the winner, No Malice.

Krone earned herself an A+ for her gallant efforts to get the most out of No Malice to ensure their place in Queen's Cup history. The future Hall of Famer was the first female rider to win the Manitoba Derby and she would go on to become the first woman to win a Triple Crown race (1993 Belmont Stakes) as well. Hall of Famer Julie Krone won the 1988 Manitoba Derby on No Malice.

The list of local favourites who delivered a win in the Derby is a short one, but count Rough Catch's win as one of those success stories. To say that the winner's circle was chaotic on August 7, 1989 would be an understatement.

Veteran trainer Shorty Gray called it the greatest thrill of his life. The local ownership of Joyce Gray, Harvey Warner and Murray Bozniak – okay, he was from Edmonton - were nothing short of giddy about the win. Then there was Rough Catch's 24-year-old groom and regular galloper, Cam Ziprick, who was so taken with the win that it was all he could do to hold “Catch” and wipe tears of joy from his eyes. In 1993, Downs patriarch, the late Albert Edward "Bert" Blake got his first Derby winner after being in the business for more than 50 years. It had been 17 years since Manitoba-bred Merry's Jay had won the Derby for the home team. Royal Frolic became the second local bred to win the Derby at the Downs and the third in the history of the Derby.

The 2005 Derby featured another Bert Blake trained horse and Prime Time T.V. would give Blake his second Manitoba Derby. Thing is, this time the master had his work cut out for himself. Going into the Derby, Prime Time T.V. was off his game. In his two previous starts, the Alberta Derby and the Manitoba Derby Trial, he had run off and left in reserve for the stretch drive. The efforts weren't pretty.  For his Derby run, Blake and jockey Travis Hightower had to get the son of Deputy Minister to relax in the early going and that's not an easy task when a thousand-pound animal has a different idea.

On Derby day, Prime Time T.V. relaxed alright, boy did he relax. After a half-mile he was running dead last and trailed the leader by 15 lengths. Then in a classic last-to-first move, he found a gear that most other horses only dream about. He roared by the entire field and won by 11 lengths. To use a phrase that Blake loved, "nice horse!"

The recent passing of Assiniboia Downs 12-time leading trainer Ardell Sayler got me to reminiscing about his 2012 Derby victory. The “Bull” had disagreements with jockey Paul Nolan as to how races should be run. Paul and Ardell had a plan and the Bull wanted no part of their "lets save some run for later" strategy. So, come Derby day, they decided to let the Bull do it his way.

The result? Balooga Bull destroyed his competition, wiring the field by nine lengths. There was no coasting in this race either. The Bull set fractions of 22.1, 46.1 and 1:11.3 for the three quarters of a mile and left nothing on the track.

When the Queen's Cup is presented to the 2019 Manitoba Derby champion, we’ll have yet another Derby memory. Will it rival any of the previous milestones?  We'll have to wait and see.

Her Majesty's Cup has put on a lot of miles since her debut. She is a treasure trove of memories with so many stories to tell and to think it all started with a royal visit that lasted an hour.